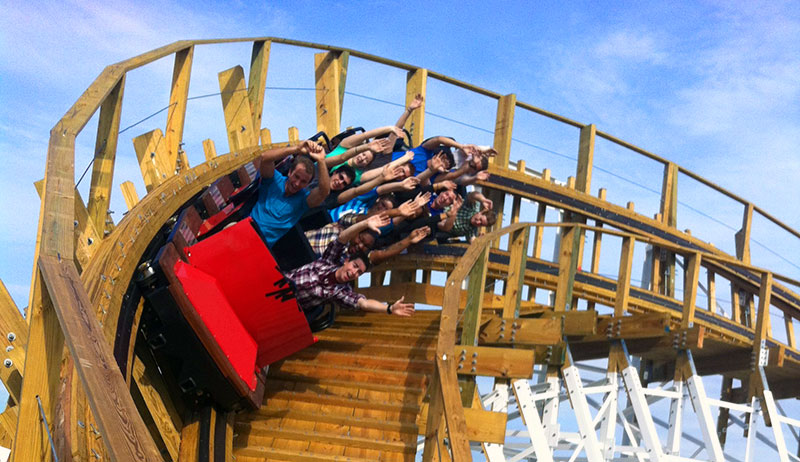 Orlando Attractions – A brand new $6 million wooden roller coaster is expected to open summer 2017 at Fun Spot America in Kissimmee, the company announced Thursday. According to John Arie Jr., Fun Spot CEO the new ride will be the only wooden coaster in the Southeast U.S. that  includes a barrel roll,  “We have worked tirelessly with the Gravity Group to design a ride that will be a must-ride coaster for any thrill seeker and coaster enthusiast, definitely bucket-list worthy,” he said.  “It’s got 0 G’s through that  barrel roll, so you don’t really even feel the pressure of coming out of your seat,” Arie said.

The new coaster does not yet have a name. “We are still working through the theming, naming rights and sponsorship opportunities,” Arie said. Apparently the attraction is in talks with a major sponsor and in addition to naming the new coaster, that company would also be allowed to theme the ride’s two trains. Design work is being done by Cincinnati-based Gravity Group.  The new ride will be constructed where two flat-track Go-Kart courses — Road Course and Slick Track — have been.

Fun Spot opened White Lightning, a wood coaster, at its Orlando location near International Drive in 2013. It goes 44.3 mph and tops out at 69.7 feet, according to the Roller Coaster Database. “If it weren’t for White Lightning we would never be in the roller coaster market. We wouldn’t be where we are today,” Arie said. “I get goosebumps when I think about it. I believe it’s a grand slam.”