West Volusia’s “Wings of the West” trail gives visitors a flight path to follow in seeing not only some of the most popular classic attractions of the area but also a fresh infusion of creative and quirky elements that make the area something to remember.

The original DeLand Wings mural, created by DeLand native and artist Erica Group, has become an iconic photo spot in downtown DeLand. Located in Persimmon Lane, the DeLand Wings started out as a simple chalk design, created quickly for a photo shoot. Following the support of the building’s owner Group was encouraged to make the mural a permanent installation, turning the mural into the ever-popular DeLand Wings. Perhaps thanks to the mural, there is a new vibe in this classic Florida downtown as artisans, retailers, brewers, and restaurateurs share their wares, creativity, and hospitality.

Also home to Florida’s first MainStreet program in 1985, DeLand was named “America’s Best Mainstreet” for 2017 and has been ranked as Florida’s best downtown outside Orlando.

Exactly 7 years after the original wings were created, a pair of “mini-wings” came along. With her son, Russ, turning 2 years old, Erica decided the time was right to revisit Persimmon Lane. “I realized there are so many parents, and pet parents, out there who would love to take photos of their child in front of the wings but can’t because of their size,” said Group. “I had to fix that, and what better time to do the seventh set than on the seventh anniversary of the first wings.”

Nearly identical to the original wings, the new mini wings are sized perfectly for kids and pets to “take flight.”

Don’t Forget to Get Your Wings Before You Skydive!

At one of the busiest drop zones in the world, many of the favorite selfies are being taken by visitors with their feet firmly on the ground. Nearly 100,000 people a year take the plunge at Skydive DeLand where tandem jumps for beginners, Accelerated Free Fall (AFF) training and advanced jumps are all part of the program offerings. Near the on-site restaurant and gear store, the Group’s second set of wings, fittingly painted as biplane wings, can be found. 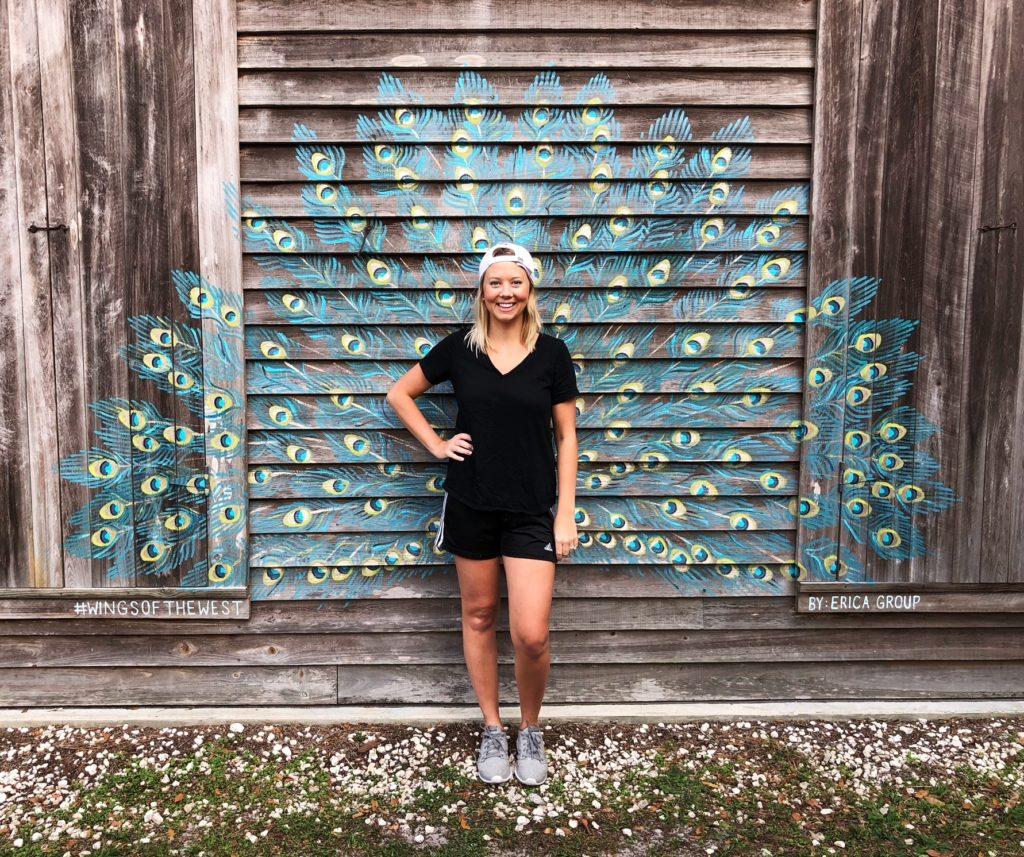 Grow your Peacock Feathers out at the Pioneer Settlement

Home to one of Florida’s premier living history demonstrations, Barberville Pioneer Settlement is a popular spot for history buffs, school groups, and a peacock wings mural. “Peacocks reside in the settlement and were the perfect muse for this set of wings,” explained Group. “The scale of this set of wings falls somewhere between adult and child-size to please the generations that frequent the settlement.” The village includes several structures set on its large grounds within a moss-draped oak hammock. On guided or self-guided tours, visitors learn of life in rural Florida in the late 19th and early 20th centuries.

The Cassadaga Spiritualist Camp is a 122-year-old community of spiritually-minded people located in rural West Volusia. Visitors come for readings from resident mediums, for church services or just to take in the peaceful energy of the community. Many also attend tours, classes, workshops and, of course, visit the fabulous gift shop. Group’s Cassadaga-inspired creation is a set of life-size fairy wings, free-standing, in a clearing within the camp’s Fairy Trail on Chauncey Street.

Search for the Florida Scrub Jay at Lyonia Environmental Center

This 360-acre scrub habitat is home to nearly 100 Florida scrub jays, dozens of gopher tortoises, and many other species that thrive in the Central Florida ecosystem. It is also home to the Lyonia Environmental Center, with its engaging and educational displays offering insight into this ecosystem, its flora, and fauna. A tour of the center offers an understanding of the county’s environment, natural heritage, and ecological challenges. Visitors can also take to the three hiking trails of the preserve for a first-hand look. While there, they can also admire another of Group’s creations, a mural of scrub jay wings, completed in October of 2018. 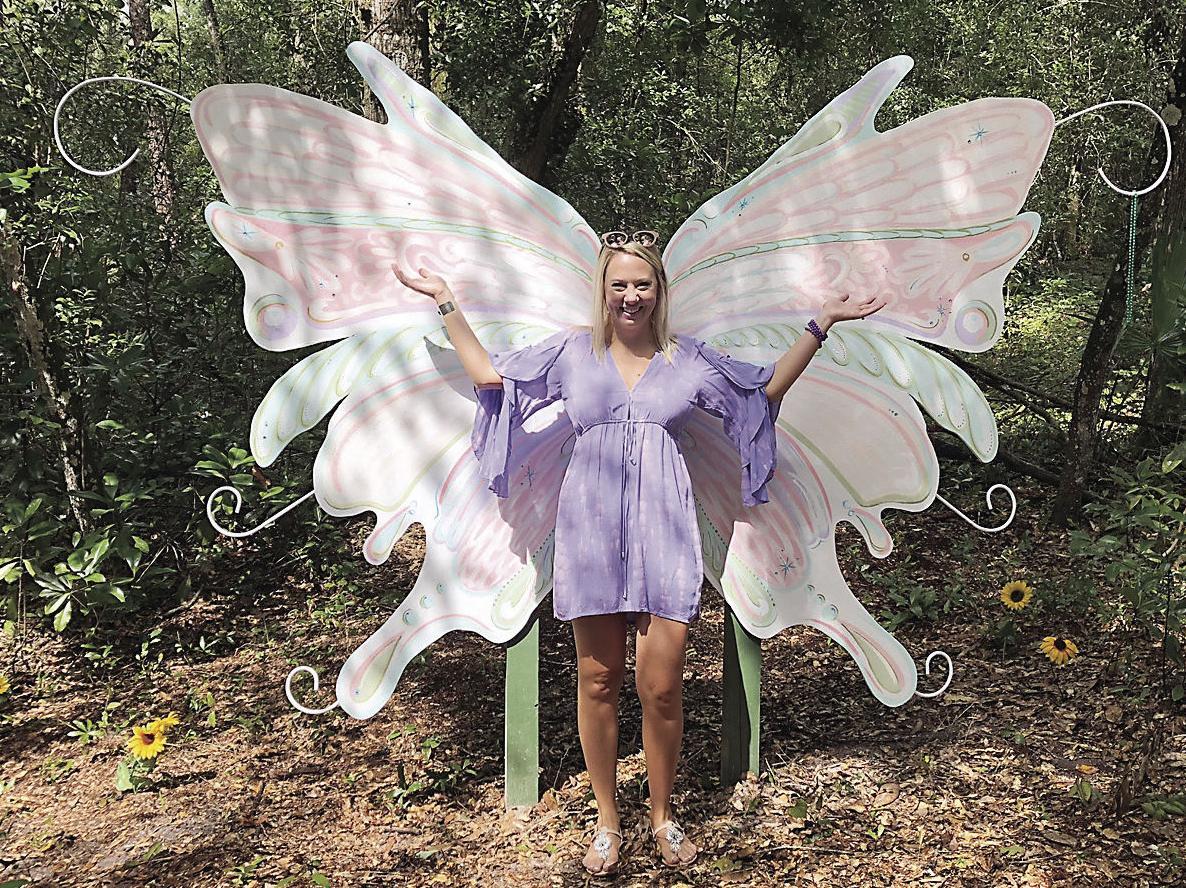 Get your Swallow-Tailed Kite Wings at Lake Woodruff

The 22,000-acre Lake Woodruff National Wildlife Refuge was established in 1964 as a migratory bird refuge. Bordered by the famed St Johns River on its western boundary, the refuge contains natural habitats including marshes, swamps, creeks, hammocks, and uplands. Man-Made dikes form pools that attract waterfowl year-round and bald eagles, deer, marsh rabbits, otters, and gopher tortoises are common sights, as well. This venue’s installment of the Wings of the West trail, swallow-tailed kite wings, is tucked away at the very end of Mud Lake Road. Past the gate and to the right, the wings are situated down the trail, under a big oak tree.

West Volusia region, a destination with stories to tell, history to share, and fun to have. Nestled between Orlando and Daytona Beach, West Volusia encompasses fourteen communities with an eclectic collection of accommodations and attractions. The authenticity travelers are looking for is here. From top-rated downtown DeLand to the scenic St. Johns River, this is real Florida.

More information on West Volusia County can be picked up at the Visitor Center located at 116 W. New York Avenue in Downtown DeLand, FL, or can be found online at www.visitwestvolusia.com. Please call 386-734-0162 for more information.