Universal Orlando Resort has officially set a grand opening date for it’s Volcano Bay water park which is currently under construction. The attraction will be open to the general public as of May 25th 2017. 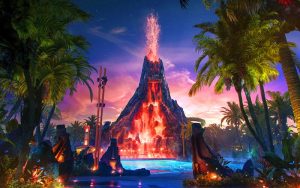 The resort has been sending out media invites for coverage starting on Wednesday starting May 22nd culminating with “a spectacular grand opening celebration” on May 25th.

Volcano Bay is being built on land wedged neatly in between Universal’s existing Cabana Bay Beach Resort hotel and I-4. Its spectacular centerpiece is a 200-foot-tall volcano that encases a raft ride called the Krakatau Aqua Coaster.

Universal Orlando has released other details about the new attraction, including that it will use star of the art technology that will allow visitors not to have to stand in long lines for rides. The ‘smart’ wristband will be known as Tapu Tapu.  Other fun elements of the park will include Tot Tiki Reef,  Kopiko Wai Winding River, Ko’okiri Body Plunge, Punga Racers and Kala &  Tai Nui Serpentine Body Slides.

Many theme park attractions will typically have a preview or “soft opening” period prior to their grand openings, but Universal Orlando has not indicated if that will happen this time around.