Orlando Attractions – Fun Spot expects to be the home of the first virtual-reality roller coaster in Central Florida, adapting the Freedom Flyer ride at its Orlando location by the Christmas holiday, an attraction spokes person said Tuesday. The company has gone ahead and purchased a VR package that will enhance the steel inverted coaster that debuted at its location near International Drive in 2013, said David Hummer, director of marketing for the attraction. The addition is currently being installed and tested, he said. Four specific seats will have the capacity to allow riders wearing VR goggles to see a different experience, he said. The storyline includes an overgrown city, a battle, robotic life forms and an appearance by the character, which currently can be seen atop the thrill ride. The story will be completed during one ride. 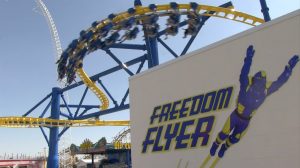 Visitors will have the option of boarding the ride in its original form or waiting for the designated VR seats. The goggles will be sanitized between each ride, Hummer said. For the past two years, VR Coaster has held demos at Fun Spot during the International Amusement Park and Attractions convention. “It’s their software that we bought, and they’ve synched it just beautifully to the Freedom Flyer,” Hummer said. “It rides out just beautifully.” Fun Spot is not raising ticket prices for the VR enhancement, Hummer said. “We’re not going to increase the price. We know that, traditionally, other parks have done an add-on,” Hummer said. “We’re going to try to refrain from doing that at this point. Last week, Fun Spot announced that it was building $6 million wooden coaster at its Kissimmee location. That ride, which does not yet have an official name, is expected to debut next summer.