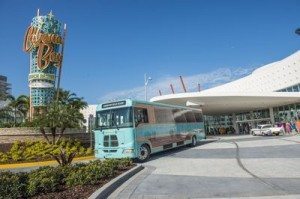 The colorful, retro-styled “moderately priced” resort opened Monday. When complete, Cabana Bay will have 1,800 rooms — half of them family suites that sleep six. (And, good news — the suites have kitchenettes, and the bathrooms have three sinks.) It’s the fourth on-site hotel at Universal and about half the price of Loews Portofino Bay Resort at Universal.

If you’re short on magic, head over to Cabana Bay’s Swizzle Lounge and enjoy a retro-themed cocktail. Or bowl at the 10-lane Galaxy Bowl. Splash around in the 10,ooo-square-foot zero-entry pool. Or grab a bite at Bayliner Diner, a massive food court. Cabana Bay is a destination resort determined to keep the kids busy. This summer, the resort will open Universal’s first lazy river.

Universal’s strategy mirrors Disney’s: If you can keep vacationers an extra day or two at your hotels, you can make a lot more money. One in every five dollars made by Disney parks and resorts comes from Disney hotels, the Orlando Sentinel reported. That’s a big deal — and even more snazzy than color TV.