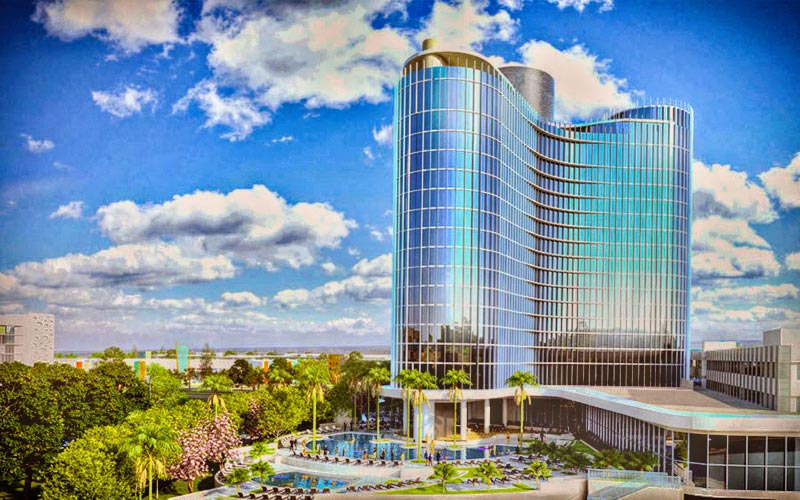 The next impressive addition to the line up of Universal Orlando hotels is Universal’s Aventura Hotel. It will offer yet another value priced option when choosing from the wide range of hotels in Orlando. According to Universal’s official blog ‘you’ll arrive to a 16-story tower that soars through the Florida sky, with sunshine and clouds reflecting in its all-glass design.

If you’re wowed by the outside, just wait until you walk into the open, loft inspired lobby, where the sunshine will stream in through 18 foot windows. Those same windows will also provide a view outside to the pool level.

After checking in and grabbing a drink from the lobby bar, it’s time to check out your modern and serene guest room, designed with refreshing, natural colors – think sea blue and rose – to ease you into vacation mode. Gaze out your room’s floor-to-ceiling windows as all of Universal Orlando Resort spreads out before you. The first choice you’ll have to make after arriving at Universal’s Aventura Hotel is, “Where to first?”

Neighboring Loews Sapphire Falls Resort, Universal’s Aventura Hotel will be just steps away from Universal Orlando’s theme parks – Universal Studios Florida, Universal’s Islands of Adventure, and Universal’s Volcano Bay (opening early summer 2017). And all of it will be accessible by walking paths or complimentary shuttle service right from the hotel.

But the fun doesn’t end when you leave the theme parks. Unwind at the hotel with a soak in the crystal clear pool or poolside hot tub – with a cocktail from the pool bar, perhaps? Meanwhile, the kids expend the rest of their energy on the nearby splash pad. When it’s time to eat, there will be plenty of choices within the hotel. On the lobby level, a casual food hall with five different cuisine options will appeal to all different taste buds. Have a seat and eat in, or grab and go back to your room.

The area of the hotel I know I’m most looking forward to is the rooftop bar, a first at Universal Orlando. Here you’ll be able to enjoy craft cocktails and small plates while soaking in the incredible panoramic views – you’ll almost be level with the tip of nearby Krakatau, the 200-foot-tall centerpiece of Universal’s Volcano Bay. Need a quick pick-me-up before heading to Universal CityWalk for the night? Starbucks will be ready with your venti in the lobby on your way out the door. And, of course, guests staying at Universal’s Aventura Hotel will receive Early Park Admission to Universal’s theme parks as well as complimentary on-site transportation.

We’re thrilled to introduce Universal’s Aventura Hotel to you today. You can start making reservations in just a few short months. In the meantime, start dreaming about being one of the first to stay at this stunning, new hotel.’