Universal Orlando Update – Our spies tell us that Universal is testing a feature similar to Disney’s Fast Pass on one if it’s ‘despicable’ rides. 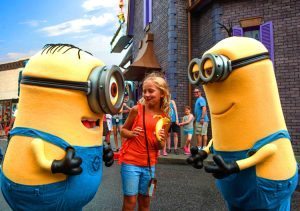 It’s not clear how well the  Universal Fast Pass type system is working or whether it is meant to be used by people before they arrive at the theme park A reporter trying to reserve a slot from a remote location Tuesday got a “reserve ticket error” message.

Universal trying out Fast Pass is not that surprising given the popularity of the Disney version, but a Universal spokesman could not be reached for comment.

Typically, Universal visitors have had to stand in line unless they wanted to pay extra for an Express Pass. Disney visitors pay nothing for FastPasses, although there are limits to how many can be used at once. Disney has made upgrades to its FastPass system, allowing people to reserve attractions in advance online.

Interestingly Universal have announced that the Jimmy Fallon ride opening in April will feature a “virtual line experience. Visitors will access the system through Universal’s app or at kiosks outside the ride entrance.

Universal’s spectacular Volcano Bay water park opening this summer will also feature technology allowing guests to avoid lines. Visitors will wear wristbands informing them when their time for a particular slide has arrived.