Twisty the Clown from “American Horror Story” gets us started like some sort of twisted hopping man-bunny like a messed up White Rabbit with giant, grinning nightmare teeth. Who doesn’t like clowns? 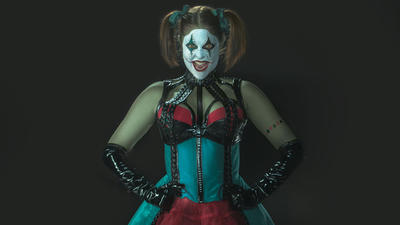 Then comes Leatherface from “The Texas Chain Saw Massacre”

There’s zombies from “The Walking Dead.”

There’s a levitating Linda Blair from “The Exorcist.”

And then this year’s mascot, Chance, which is a lot like a version of Harley Quinn, and former mascot Jack the Clown’s femme fatale of sorts.

The after-hours, separate-ticket event at Universal Studios begins Sept. 16. It runs for 31 select nights before wrapping up on Oct. 31.

This year will feature haunted houses based on those four horror titles above as well as “Krampus” and “Halloween” and three home-grown haunted houses: “Lunatics Playground 3D,” “Ghost Town: The Curse of Lightning Gulch” and “Tomb of the Ancients.”

The base, one-night admission to HHN26 will be $104.99, which is $3 more than 2015. Florida residents and annual passholders can find cheaper deals as well as those staying at the hotels or doing multi-day passes.

Also new in 2016 is an add-on horror experience called the Repository, a virtual-reality space that will run from Sept. 29-Oct. 31 at a cost of $49.99 in addition to regular event admission. It requires reservations, so those who want to pony up for that need to call 407-224-7840.

For more information about the event, go to halloweenhorrornights.com/orlando.