Orlando Attractions Update – Universal Studios have announced that a ride based on Universal Pictures’ huge Fast and the Furious franchise will be coming to Universal Orlando Resort. Hit the jump for details on the Orlando Fast & Furious ride. 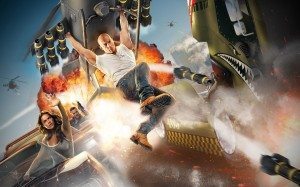 As you might know, Fast & Furious: Supercharged opened as part of the famous Tram Tour at Universal Studios Hollywood this Summer. The attraction will be coming to Universal Studios Florida in 2017 as a stand-alone ride which should offer more than the Hollywood version. Universal also released a concept image of what looks to be the queue area for the ride, which will let park guests explore some of the fast cars from the Fast and the Furious film franchise.

Here is the official information – Fast & Furious it will be!

“You’ll feel like part of the “Fast family” as you embark on a thrilling new Fast & Furious adventure that will put you right in the middle of the action. This ride is going to fuse everything you love about the films with an original storyline and incredible ride technology. You’ll get to check out some of the high-speed, supercharged cars you’ve seen on the big screen. You’ll be immersed in the underground racing world made famous in the films and explore the headquarters of Toretto and his team. Then, you’ll board specially-designed vehicles for an adrenaline-pumping ride with your favorite stars from the films.”