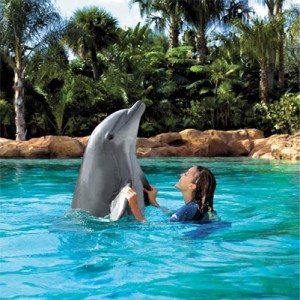 Orlando Attractions Update – Orlando’s Discovery Cove has once again won the top spot in TripAdvisor Travelers’ Choice competition.  It was ranked the No. 1 amusement park in the world for 2014. Universal’s Islands Of Adventure, Magic Kingdom and Disney’s Hollywood Studios were ranked second, third and fourth in the U.S.

The awards are based on reviews and opinions post by users on the TripAdvisor travel website. An algorithm takes into account the quantity and quality of reviews for amusement parks and water parks worldwide, gathered over a 12-month period.

“We’re honored that Discovery Cove has been recognized on the world’s stage once again for its ability to deliver an unforgettable vacation experience,” said Stewart Clark, vice president of Discovery Cove. “Our up-close animal interactions inspire and give guests a greater appreciation for our planet and its incredible species.”

Europa-Park of Rust, Germany, was ranked second in the global amusement-park list.

The top water park in the U.S., according to TripAdvisor, is Disney’s Blizzard Beach, followed by Disney’s Typhoon Lagoon and Aquatica, SeaWorld’s water park. Wet ‘n Wild held down the ninth position in that list. The top water park globally is Siam Park in Adeje, Spain.