Home » This is the Way…to Planet Hollywood

This is the Way…

Unless you’ve been hiding under a rock, it’s hard not to know that Star Wars has a huge presence at Walt Disney World. Beginning with the official opening of Star Tours at Disney’s Hollywood Studios (then Disney-MGM Studios) on January 9, 1987, and continuing with the 2019 opening of Galaxy’s Edge, Disney World has become a Star Wars fan’s paradise. The launch of the Disney+ streaming service on November 12, 2019, and the premiere of “The Mandalorian” on the same day, allowed Disney to bring the Star Wars universe to an even wider audience. Now, a small piece of “The Mandalorian” has been brought to Planet Hollywood Disney Springs! This is the way.

If you don’t know the story, here is a quick summary. “The Mandalorian” is set five years after “Star Wars: Episode VI – Return of the Jedi” and the fall of the Galactic Empire. It features Din Djarin (Pedro Pascal) as a lone Mandalorian bounty hunter crossing the galaxy with an important bounty, Grogu (also known as The Child or Baby Yoda to fans of the show). Along the way, he encounters many foes, most notably Moff Gideon (Giancarlo Esposito), who want to capture Grogu to harness his powers for evil. Moff Gideon is a former officer of the Imperial Security Bureau who continues to lead scores of Stormtroopers in pursuit of reclaiming power. So as not to give away any plot twists or endings for those of you who haven’t had the opportunity to enter this new storyline of the Star Wars Universe, that will be the wrap-up.

While filming episodes 7-8 of “The Mandalorian,” the production crew realized that they didn’t have enough costumes to outfit all of the Stormtroopers that would be needed for several scenes. Much to the delight of the local 501st Legion chapter, series writers/directors Jon Favreau and Dave Filoni reached out for some help. Ok, you’re probably asking yourself “What is the 501st Legion?”. Well, here you go!

You have probably seen members of the 501st Legion before and just didn’t realize it. According to their website, they are “…an all-volunteer organization formed for the express purpose of bringing together costume enthusiasts under a collective identity within which to operate. The Legion seeks to promote interest in Star Wars through the building and wearing of quality costumes, and to facilitate the use of these costumes for Star Wars-related events as well as contributions to the local community through costumed charity and volunteer work…” So now you see how exciting it was for these uber-fans to get to portray Stormtroopers in an actual Star Wars television series!

The Stormtrooper Comes to Orlando 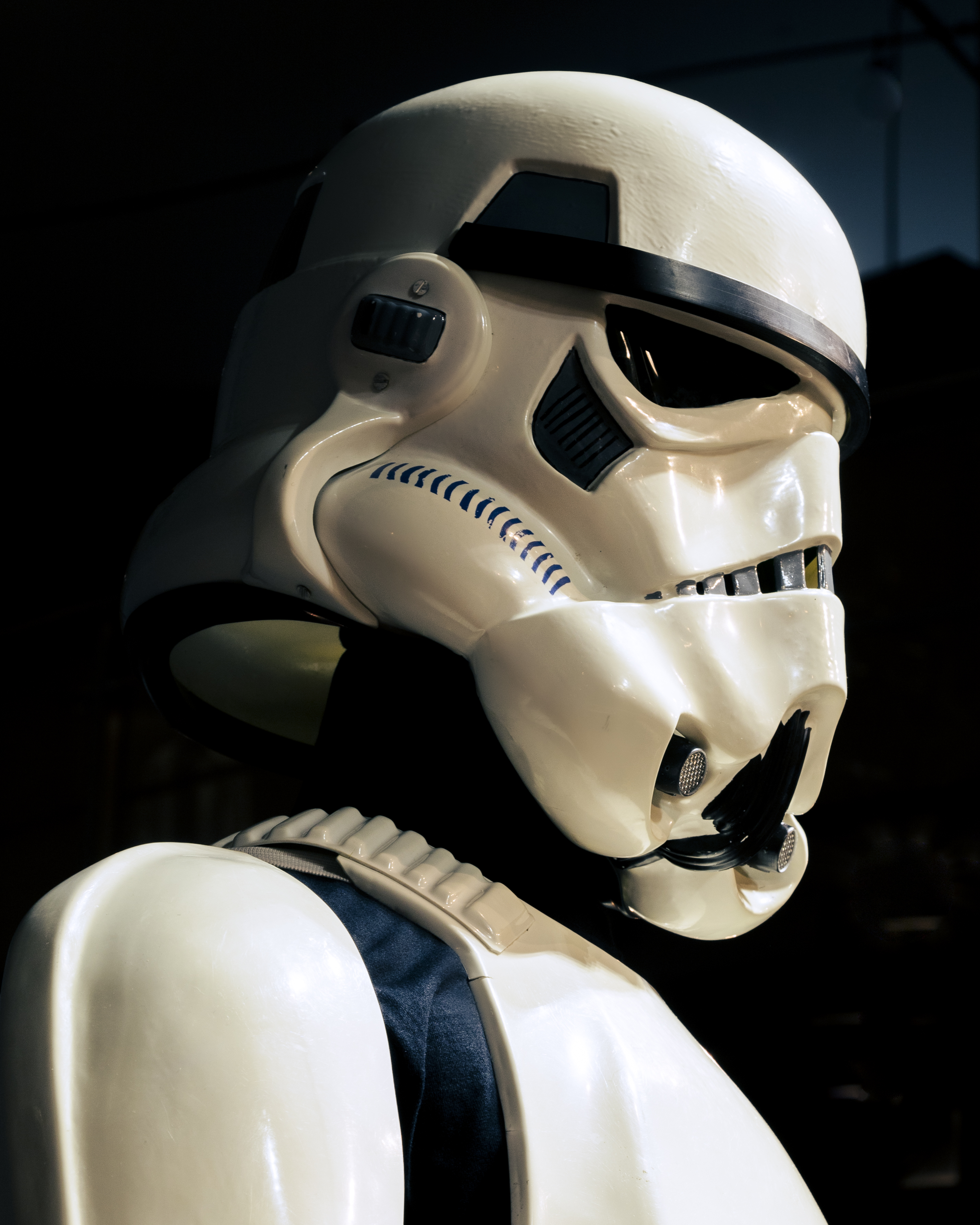 In August of 2020, this Stormtrooper costume hit the auction block, and Planet Hollywood knew that they had to have it to display at Disney Springs! The costume was made by a member of the 501st Legion and worn in “The Mandalorian.” The seller chose to remain anonymous, but they hope that he would be happy to know that his creation is delighting thousands of Star Wars fans every day who dine at Planet Hollywood Disney Springs.

A Tricky Costume to Display

This costume consists of seventeen (17) individual pieces, most of which are made from a lightweight, and fragile, plastic. This is the way…it must be displayed. Planet Hollywood had to order a flexible mannequin to be able to display the costume because many of the pieces would not slide over the rigid angles of a traditional mannequin. On October 21, 2020, the Memorabilia team carefully boxed each piece of the costume for transport from the warehouse to the restaurant at Disney Springs. Once there, they carefully dressed the mannequin, making sure not to damage the costume pieces. After about an hour, the Stormtrooper costume was ready to begin its watch over our guests and ensure order in this part of the Galaxy!

Come visit Planet Hollywood Disney Springs to see this cool costume along with the other Star Wars memorabilia that is on display! This is the way.