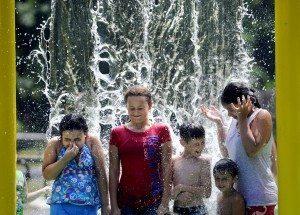 The limited-time Summer Soak Party is basically a large tented area rigged up with sprinklers on the stage of Bayside Stadium, which has been home to concerts, an ice-skating rink, Halloween events and “Wheel of Fortune.”

Some folks taking the plunge last weekend simply took off running or spinning below the sprinklers. There also were SeaWorld Orlando team members, garbed up in rubber waders, on the scene to organize games such as “Red Light, Green Light” and incorporate props such as hula hoops.