Home » Summer of Mars At KSC

It’s official – The Summer of Mars has landed at Kennedy Space Center Visitor Complex! The campaign will provide guests with a front row seat to the Journey to Mars, and is designed to showcase the myriad experiences and activities that focus on the future of space exploration. The focus on Mars as the next space destination is incorporated as a theme throughout Kennedy Space Center Visitor Complex, with activities such as the Journey To Mars: Explorers Wanted live theater and interactive experience; the Journey to Space 3D film in the IMAX® Theater; a special edition of Science on a Sphere a comparison of the Red Planet to Earth, a custom 3D Eyes on the Red Planet presentation highlighting the last two decades of our robotic exploration on Mars; and Cosmic Quest, an interactive game that includes missions to Mars like building a Mars habitat. 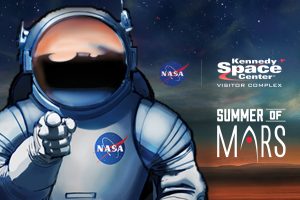 In addition to everyday activities, the Summer of Mars will be accented by several special exhibits available at no extra charge to guests. The Lockheed Martin Generation Beyond: Mars Experience Bus will be at Kennedy Space Center Visitor Complex until the end of August as part of its nationwide tour. As the first immersive virtual reality vehicle that replicates 200 square miles of Martian landscape, the bus uses video game technology to make riders feel as though they are moving across Mars. Riders will see images derived from NASA photos on Mars, rovers already on the Red Planet and a mock-up of what the first Mars base camp could look like. The Lockheed Martin Generation Beyond: Mars Experience Bus will remain stationary during this experience.