Walt Disney World has announced more plans for its “Star Wars” franchise within Disney’s Hollywood Studios theme park. More characters and scenes from upcoming films soon will be incorporated into the park’s everyday lineup in addition to the “Star Wars”-inspired land currently under construction there. 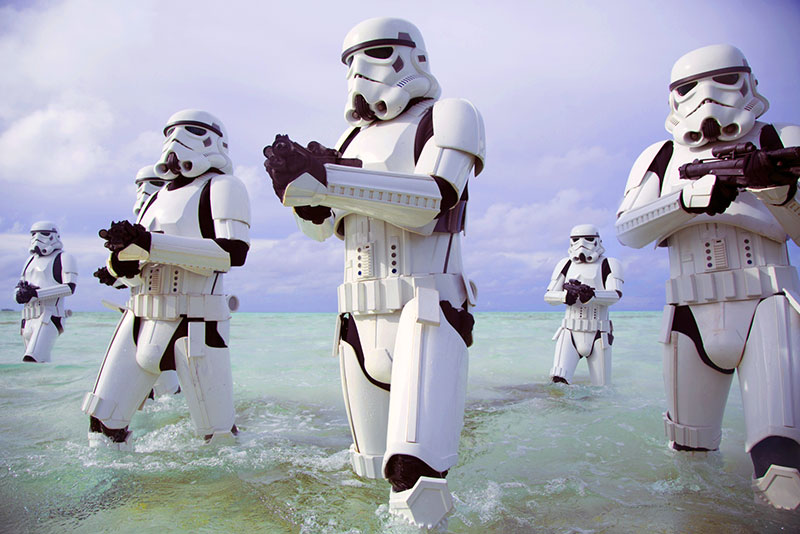 Disney also announced that it would be doubling up on the nighttime spectaculars at Hollywood Studios. From Dec. 16 to Dec. 31, the park will put on the new holiday show “Jingle Bell, Jingle Bam,” as well as “Star Wars: A Galactic Spectacular,” which debuted earlier this year. Both shows revolve around digital projections onto the park’s Chinese Theater.

The announcements were included in a Disney Parks Blog meetup tied to the film “Rogue One: A Star Wars Story,” which debuts Dec. 16. Actor Mads Mikkelsen, who plays Galen Erso in the film, made an appearance at the Epcot event, which culminated with the digital — and temporary — transformation of the park’s iconic Spaceship Earth into the famed Death Star. In addition, show director Michael Roddy announced that Advanced Weapons Research Troopers, characters from “Rogue One,” will be incorporated into the Hollywood Studios’ “Star Wars: A Galaxy Far, Far Away” daytime show on Dec. 16.

“They’re like the Navy Seals of the Empire. They’re the most effective weapon,” Roddy said. “They’re like the blunt force that the empire uses to go on excursions when they really need to take care of something.” The addition of more films and characters could continue to be reflected in the “Far, Far Away” show, he said. “As these films keep coming out, when we find compelling characters that add to that moment, we can trade them out or add them,” Roddy said. Also in mid-December, the Star Tours ride will switch back to randomized beginnings and destinations. After “The Force Awakens” opened, the attraction began each journey on Jakku.

Finally, an official Star Wars tour is being planned for 2017. It will last for seven hours and include stops at attractions such as the Star Wars Launch Bay and Jedi Training, themed dinner and dessert party, fireworks and other elements. “It will be a Star Wars dream for fans,” Roddy said.