Home » ‘The Shining’ Comes To HHN

Everyone’s favorite horror classic “The Shining” is coming to the 2017 edition of Halloween Horror Nights at Universal Studios in Orlando. 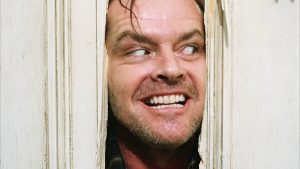 The iconic 1980 film will be featured in haunted house/maze form for the first time at the event. HHN27 guests will be able to wind their ways through the movie’s Overlook Hotel and observe “caretaker Jack Torrance’s spiraling descent into insanity” in the process, a Universal news release said Friday.

The film starred Jack Nicholson as Torrance, who, whilst cutting through the bathroom door with an ax, utters the classic pop-culture line of “Heeeeeere’s Johnny!”

“We cast the Overlook Hotel as the aggressor and view it as if you have the ‘shining,’” said Charles Gray, an HHN show director, on Universal’s official parks blog. “Our goal is to have you constantly doing a double take and give you that, ‘Did I just see that?’ feeling.”

Nightmarish visions overwhelmed guests, murderous ghostly entities and paranormal forces are also promised in the release for the HHN maze.

Universal Studios Hollywood in California also will have a “Shining” house.

“The Shining” is the second announced intellectual property for Orlando’s event. Earlier, it was revealed that the TV series “American Horror Story,” which airs on FX, will be included as a maze. Typically, the event includes eight or nine houses.

HHN gets its earliest start ever this year, debuting on September 15th. The popular event continues on select nights through Nov. 4.