Orlando Attractions Update – Following controversy over its treatment of killer whales, SeaWorld San Diego announced Friday that it plans to double the size of its orca environment, contribute an additional $10 million to research on the species and establish an independent advisory committee of scientists to oversee its orca program. 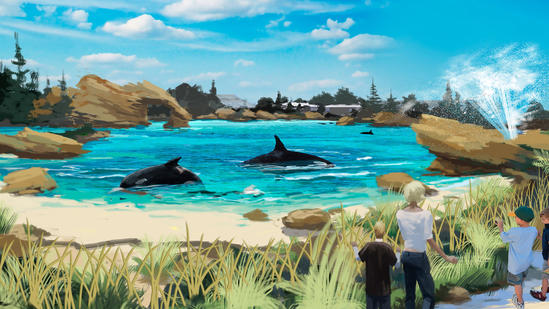 Called the Blue World Project, the new orca environment will be nearly double the size of the current facility for Shamu 7 family, covering 1.5 acres at 50 feet deep and 350 feet in length. The new habitat will have 10 million gallons of water, up from 5.6 million.

The new pool will allow visitors to view the orcas from a 40-foot-tall glass wall below the water line, SeaWorld officials said in an announcement.

The new space, described as the first of its kind, is slated to be completed by 2018, officials said. SeaWorld parks at Orlando, Fla., and San Antonio, Texas, will follow with similar orca projects, officials said.

“Through up-close and personal encounters, the new environment will transform how visitors experience killer whales,” Jim Atchison, chief executive officer and president of SeaWorld Entertainment Inc., said in a statement.

SeaWorld San Diego has 10 orcas in the Shamu family. The cost of the new habitat for them was not released. An underwater current will provide exercise for the orcas, officials said.

“Our guests will be able to walk alongside the whales as if they were at the shore, watch them interact at the depths found in the ocean, or a birds-eye view from above,” Atchison said.