SeaWorld returned 10 critically endangered Kemp’s ridley sea turtles to the ocean at the Canaveral National Seashore after successful rehabilitation at its Orlando rescue facility. These 10 join the more than 2,500 sick, stranded, and injured sea turtles rescued and rehabilitated by SeaWorld coast-to-coast since 1980. With the latest cold temperatures adding to the number of animals in need, SeaWorld Rescue operations in Orlando, San Antonio, and San Diego are all experiencing increased volumes of calls for help. 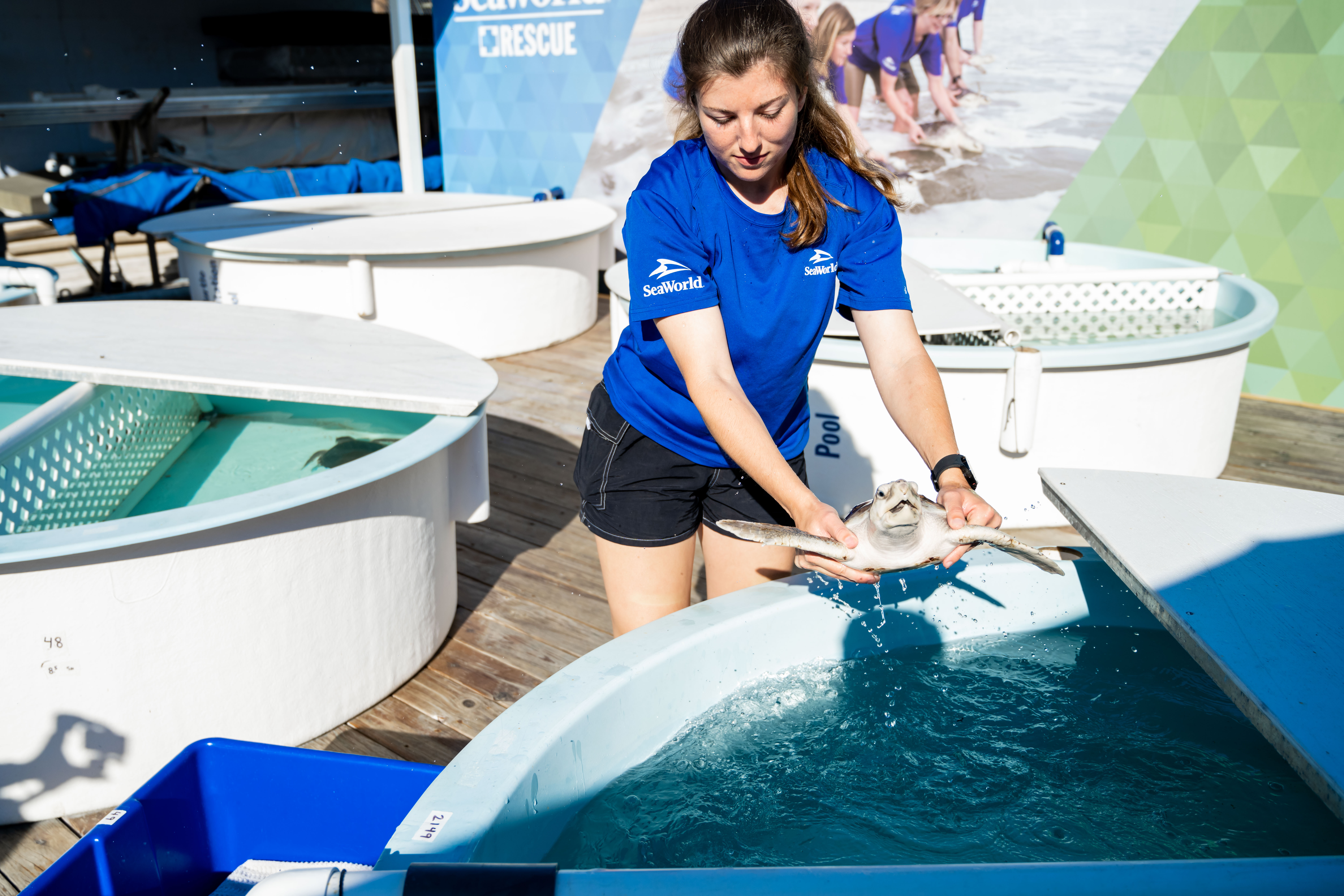 “Sea turtles are vital to a healthy ocean ecosystem and are an important part of our commitment to protect marine animals and their habitats,” said Dr. Chris Dold, President of the SeaWorld Conservation Fund and Chief Zoological Officer of SeaWorld. “We are committed to seeing every species of sea turtle return to a state of abundance. That is what drives our dedicated rescue and rehabilitation teams and what inspires our Conservation Fund grants to help others who share our passion and mission to save the sea turtle.”

All the sea turtles released are juveniles with measurements ranging from 22 to 30 centimeters. They were first rescued by the New England Aquarium and National Marine Life Center in November 2021 after being stranded and cold-stunned on Cape Cod. After receiving initial care at these facilities, the sea turtles were flown to SeaWorld Orlando on December 2, 2021, for treatment and rehabilitation that included nebulization with medicine to prevent and treat common cold-stunned effects such as pneumonia, hydration via subcutaneous fluids, and hearty nutritious diets necessary to help them gain the nutrients and strength required to heal.

Helping sea turtles in need is a complex process, requiring coordination and support from a community of partners. For example, as colder winter temperatures in the Northeast can quickly overwhelm local capacity, regional stranding networks and teams like SeaWorld step forward to help. Earlier this Winter, SeaWorld San Antonio accepted 16 cold-stunned turtles from the Sea Turtle Stranding and Salvage Network. SeaWorld is a member of the Southeast Sea Turtle Stranding Network. 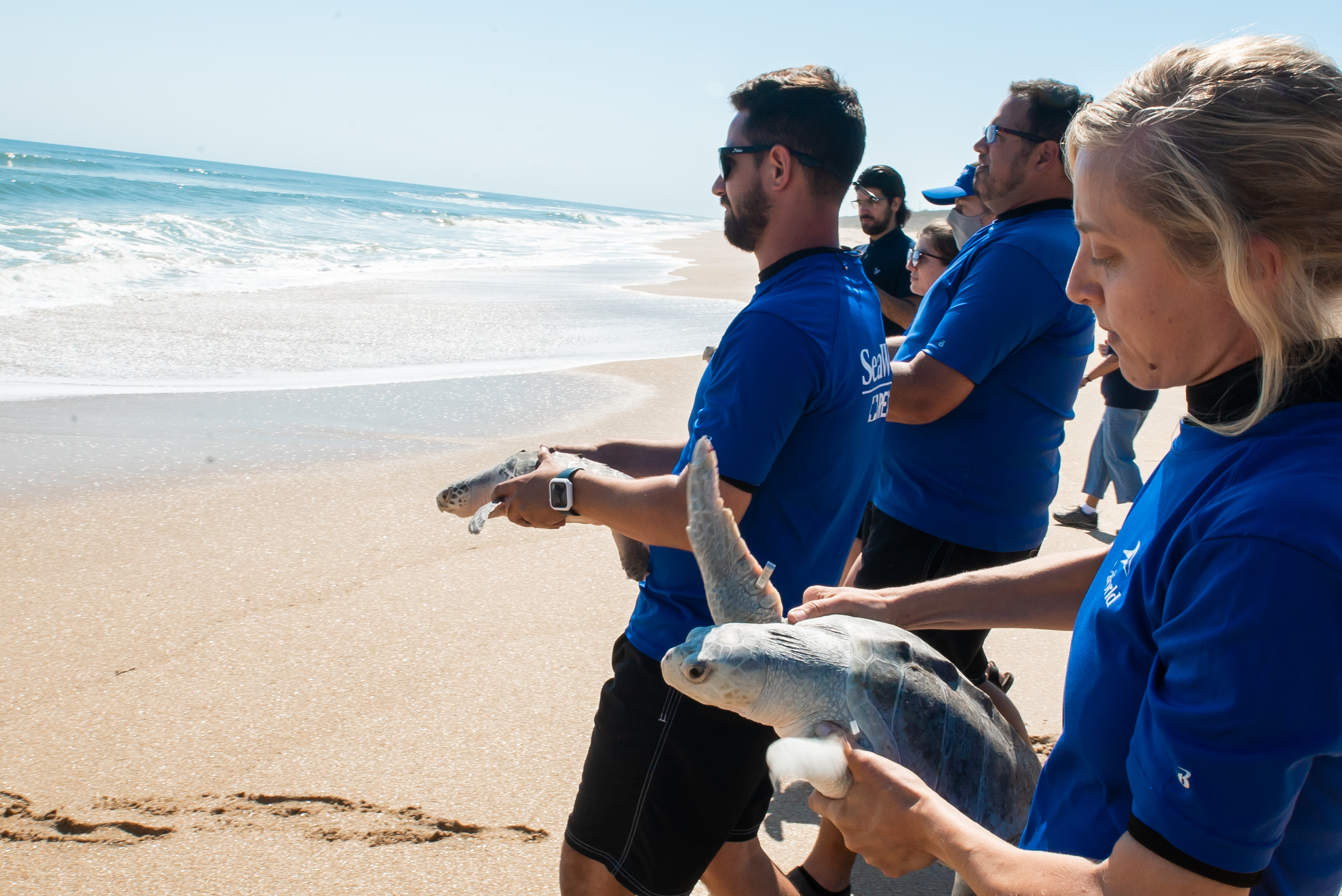 “SeaWorld and other partners in the Greater Atlantic and Southeast Sea Turtle Stranding and Salvage Network are critical to providing the long-term care ill and injured sea turtles need,” said Meghan Koperski, Biological Scientist at Florida Fish and Wildlife Conservation Commission. “The facilities and veterinary teams at SeaWorld provide the high-level of care needed to give these turtles the best chance at survival and a successful return to their natural environment.”

Rescue, rehabilitation, and return of injured and stranded sea turtles is critical to preventing species extinction. SeaWorld rescues an average of 140 sea turtles per year due to habitat destruction, cold stunning, illness and disease, and the human impact such as boat strikes, entanglement, and littering.

The International Union for Conservation of Nature (IUCN) recognizes seven species of sea turtles. SeaWorld has rescued six of those seven species including Kemp’s/Atlantic ridley (critically endangered), hawksbill (critically endangered), olive/Pacific ridley (vulnerable/threatened), leatherback (vulnerable/threatened), green (endangered), and the loggerhead (vulnerable/ threatened). The only sea turtle species not rescued to date by SeaWorld is the flatback which lives in waters around Australia, Indonesia, and Papua New Guinea.

“We are incredibly thankful to the SeaWorld team for their continued support of our mission to protect and preserve sea turtles along the entire Guatemalan Pacific coast,” said Colum Muccio, Development Director of ARCAS. “Our Hawaii Park’s efforts to rescue and incubate endangered species such as the Leatherback Sea Turtle is critical in the conservation of this valued species.”

Specific projects and organizations supported include:

SeaWorld Entertainment, Inc. (NYSE: SEAS) is a leading theme park and entertainment company providing experiences that matter, and inspiring guests to protect animals and the wild wonders of our world. The Company is one of the world’s foremost zoological organizations and a global leader in animal welfare, training, husbandry, and veterinary care. The Company collectively cares for what it believes is one of the largest zoological collections in the world and has helped lead advances in the care of animals. The Company also rescues and rehabilitates marine and terrestrial animals that are ill, injured, orphaned, or abandoned, with the goal of returning them to the wild. The SeaWorld® rescue team has helped more than 39,000 animals in need over the Company’s history. SeaWorld Entertainment, Inc. owns or licenses a portfolio of recognized brands including SeaWorld®, Busch Gardens®, Aquatica®, Sesame Place®, and Sea Rescue®. Over its more than 60-year history, the Company has built a diversified portfolio of 12 destination and regional theme parks that are grouped in key markets across the United States, many of which showcase its one-of-a-kind zoological collection. The Company’s theme parks feature a diverse array of rides, shows, and other attractions with a broad demographic appeal that deliver memorable experiences and a strong value proposition for its guests.