Orlando Attractions Update – SeaWorld has laid off the three mimes who for years were a popular part of the Clyde & Seamore sea-lion and otter show, according to friends and fans.

Jim Hackworth was one of three men who portrayed pirate mimes at SeaWorld. 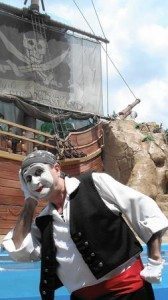 They performed in the pre-show for Clyde & Seamore, currently on hiatus and reopening with a new theme in the spring. For months, SeaWorld had been mum about whether the mimes would be part of the new show.

SeaWorld spokesman Fred Jacobs would not say whether the mimes were let go. However, he said in an email, “we are still in the production process, but we do not currently have plans for mimes in the pre-show.”

None of the performers could be reached for comment, but a person who answered the phone at one of their homes acknowledged the layoffs.

Eric Davis, a blogger who runs pro-SeaWorld sites, including one that received a startup investment from the company, said he spoke with one of the performers about the layoffs.

“They were, unfortunately, casualties,” Davis said. “They were very beloved.”

News about the layoffs was posted on a Facebook page for the SeaWorld Mime Fan Club Orlando.

“Our 3 mimes, Jim, Tom and Lynn have been laid off from SeaWorld. Something every revisiting guest looks forward to. but it’s no more,” wrote Kyron O’Gorman, administrator of the page.