SeaWorld has surpassed the milestone of rescuing 40,000 injured, sick, and orphaned animals, underscoring the unrelenting need to help animals in need. SeaWorld has passionately dedicated time, energy, and resources to help a wide range of animal species since its first rescue of a beached Dall’s porpoise in 1965. SeaWorld is a professionally accredited zoo and one of the largest marine animal rescue organizations in the world. A portion of proceeds from SeaWorld tickets and in-park purchases goes toward funding rescue and rehabilitation. 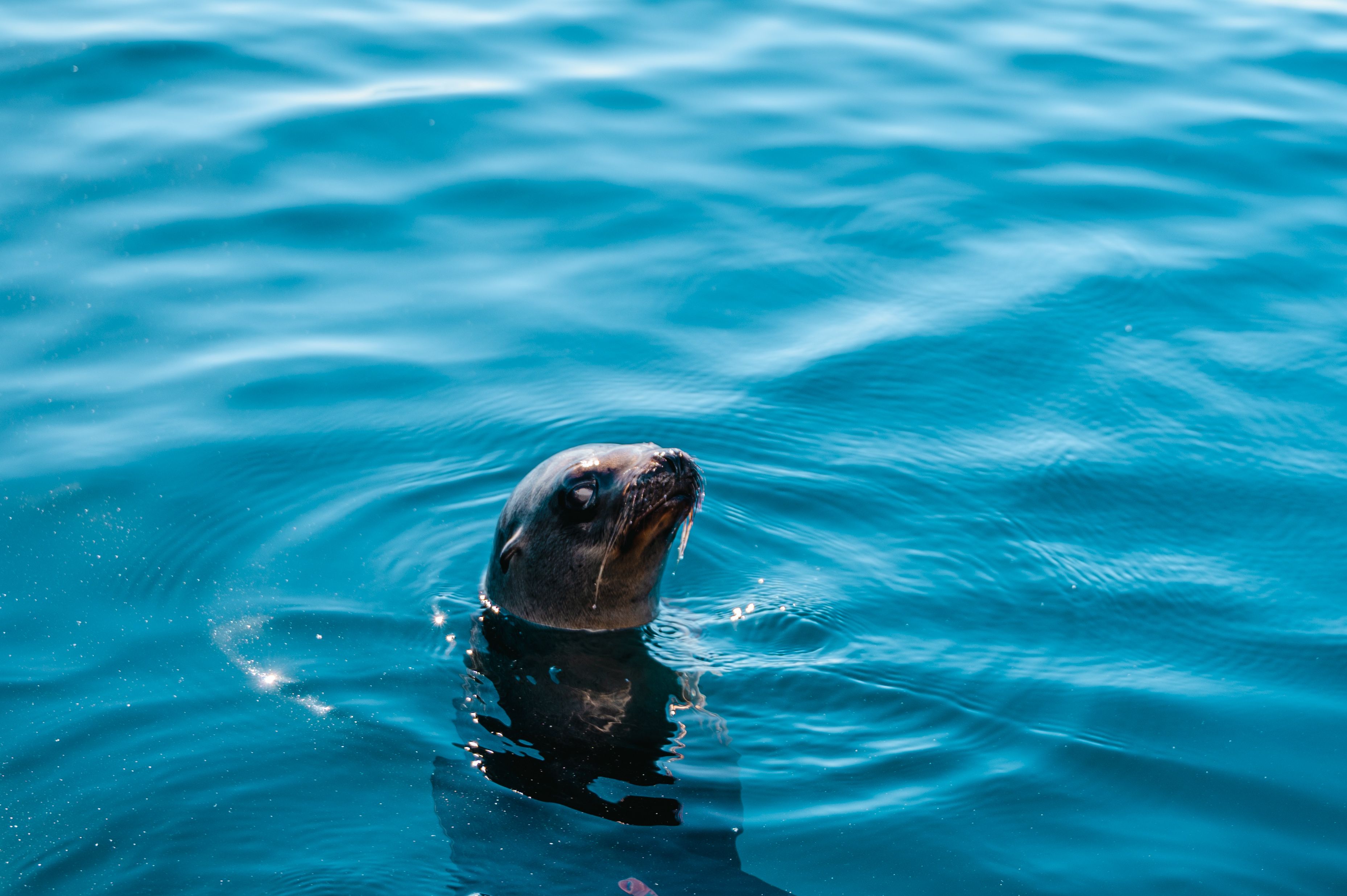 SeaWorld rescue teams are located in Orlando, San Antonio, and San Diego and are on call 24×7, 365 days a year to help. The more than 40,000 animals rescued span diverse species such as aquatic birds, pinnipeds, turtles, manatees, whales, dolphins, otters, and a wide range of other mammals and fish. The milestone serves as a bleak reminder that marine wildlife continues to face threats. Rehabilitation and return can help. For those few deemed non-releasable by wildlife authorities, accredited zoos like SeaWorld can provide permanent long-term care.

Dr. Chris Dold, Chief Zoological Officer of SeaWorld Parks and Entertainment said, “Our teams are responsible for the care and well-being of thousands of animals – both those rescued and in residence – and while we’d much rather live in a world where wildlife doesn’t need our help to thrive in healthy abundance, that’s not today’s reality. Rescue and rehabilitation can save the lives of individual animals, and in some cases supports the preservation of endangered and threatened species, like the Florida manatee. That is why we do this work, and why it is so important for accredited zoos and aquariums like ours to continue efforts to help animals that cannot survive on their own.” 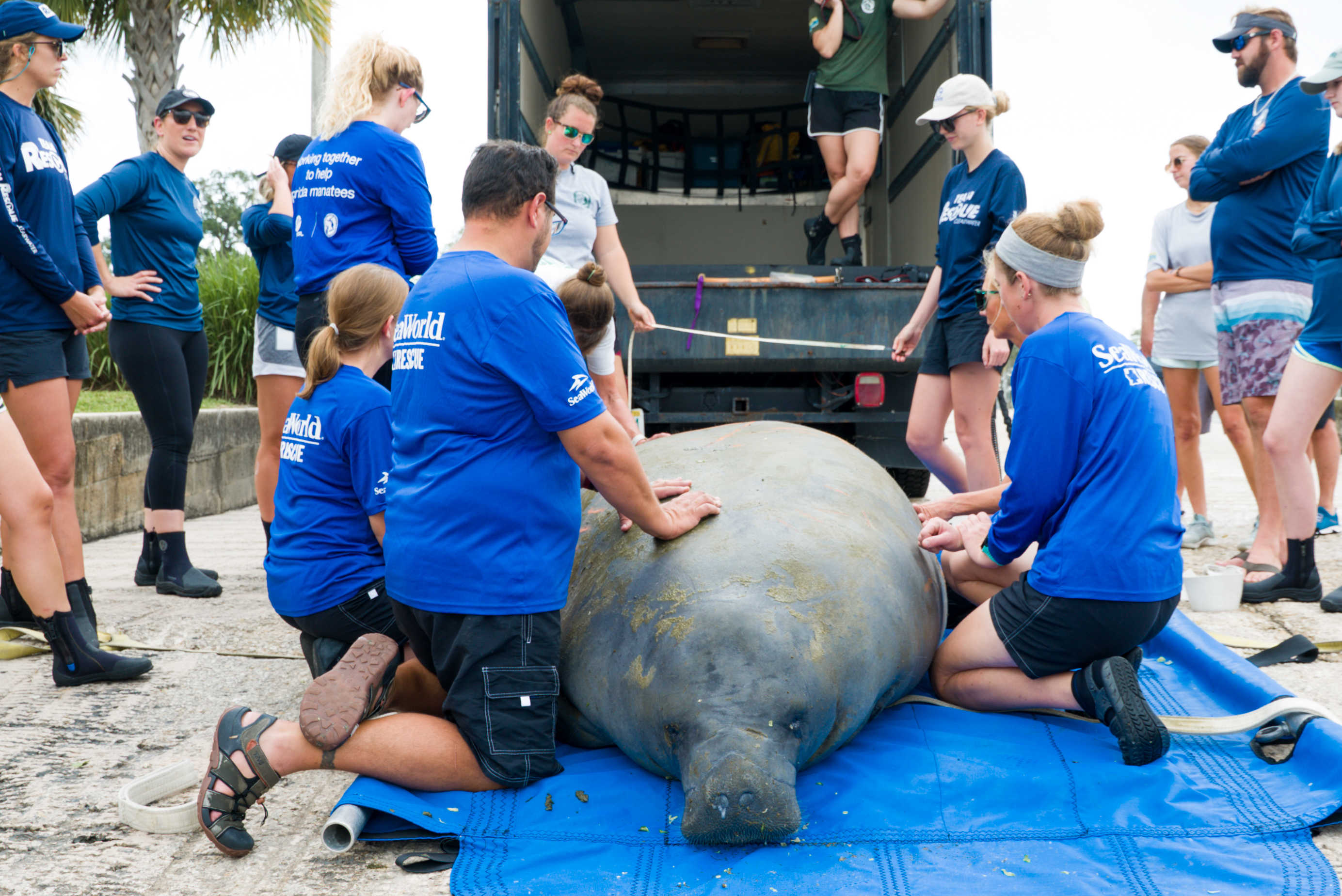 The SeaWorld team of veterinarians and animal care experts has been caring for animals for more than fifty years and amassed substantial expertise, some of which is used by other zoos and aquariums worldwide. Each rescue team member undergoes training at SeaWorld and in the field alongside our stranding network partners. They must also have a strong working knowledge of nets, boats, animal safety, transporting animals, oil spills, first aid, CPR, water rescues, and much more. Rescue supervisors average 10+ years of animal care experience and rescue curators, or park rescue leaders, average more than 20 years. The cumulative experience enables SeaWorld to cultivate and train the next generation of experts.

SeaWorld has dedicated rescue and rehabilitation facilities at every park. Each is equipped to care for the species most often rescued. For example, seals, sea lions, and sea otters on the West coast; manatees and dolphins on the East coast. Some operations are the largest of their kind such as SeaWorld Orlando, the largest manatee rescue operation in the U.S., and one of only five critical care centers in the US. Its five-acre rescue center can care for up to 60 manatees at a time. 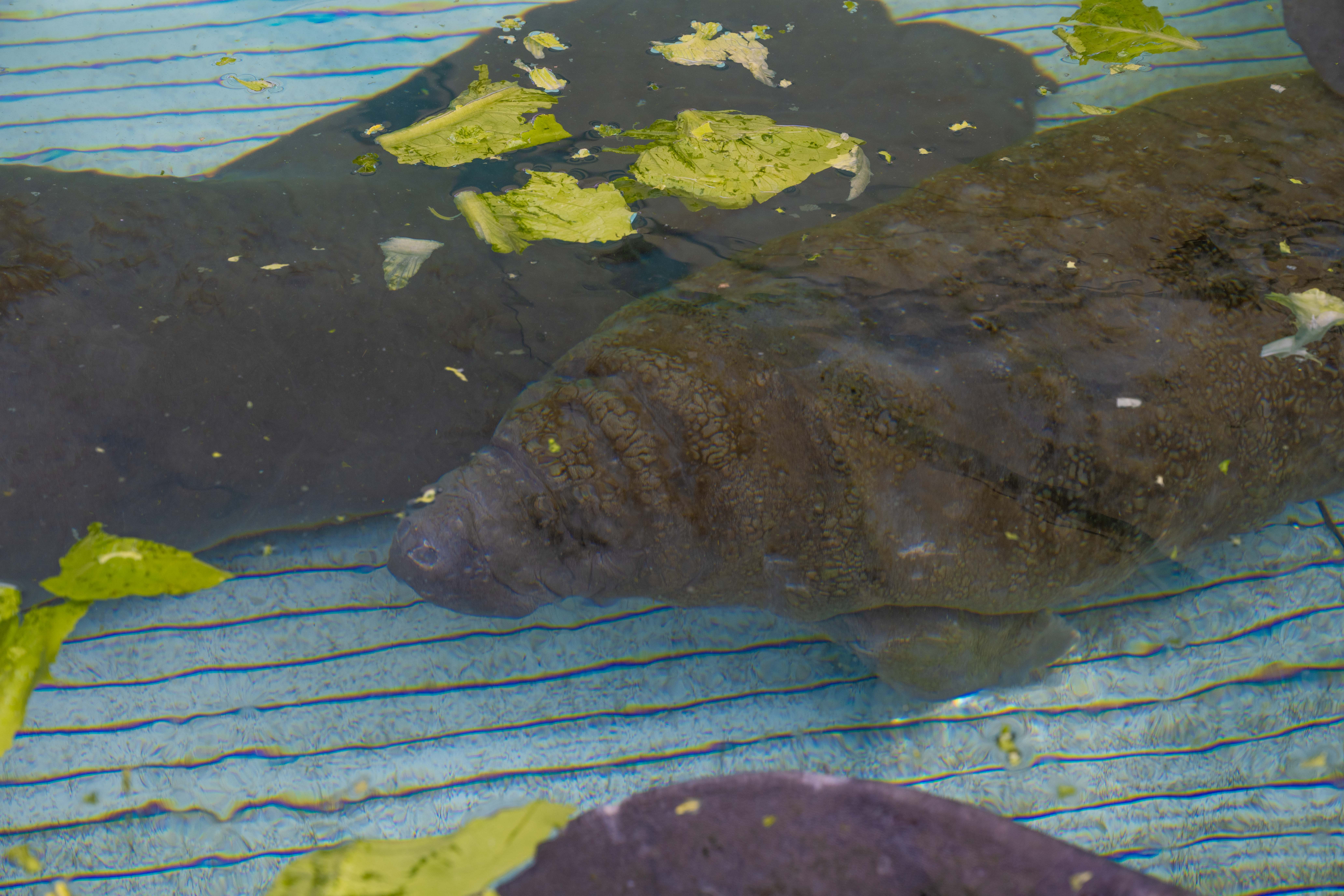 Rehabilitation and medical treatments are highly specialized and challenging due to a variety of factors including logistics, physiology, and anatomy. The experience gained by caring for such a diverse set of species, providing critical care to rescued animals, and specialized care to neonatal and geriatric cases as is typical in a zoological setting like SeaWorld, provides insight and knowledge into animal health and wellness that cannot be replicated by the study of animals outside of human care alone. These insights contribute toward improved animal health, rescue, and triage.

For example, the study of dolphins in SeaWorld care led to significant veterinary advances involving blood parameters, milk matrix, intubations, surgeries, and stem cell therapies. The advancements also improve rescue with many dolphins now able to be treated on the scene and immediately released – more than any other species rescued – which has a dramatic impact on the survival rate of these animals. 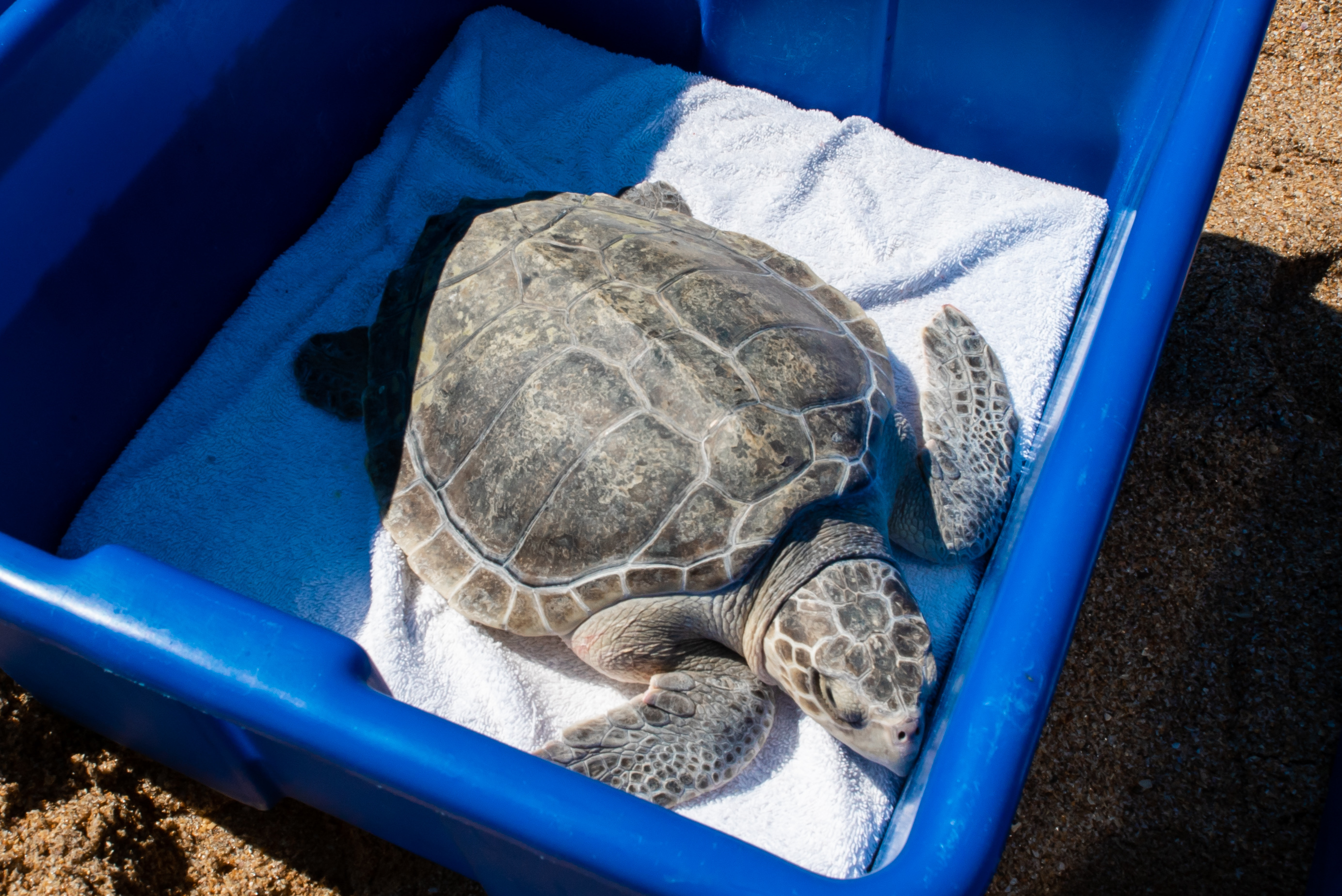 Rescued animals suffer from a variety of conditions such as starvation, cold stunning, dehydration, shark attacks, propeller wounds, entanglements, and many are found to be dependent orphans. The causes of these conditions range widely from natural events like drops in temperature and displacement from storms to anthropogenic conditions like oil spills, fishhook and line injuries, ingestion of foreign items like plastic, boat strikes, and lack of food sources from pollution.

One recent success story with a displaced Laysan Albatross occurred when the bird was rescued from an agricultural field far away from the ocean, though they are meant to live their entire lives at sea. This species is near-threatened and native to the Northwestern Hawaiian Islands. With supportive care provided by SeaWorld’s team, the bird was able to receive the fluids and nutrition it needed to recover and was later returned to its ocean habitat.

Animals in need often find themselves in dangerous locations, making it a challenge to rescue them safely. Earlier this year, a sea lion made national headlines when it was found in the center of a San Diego freeway. Good Samaritans alerted SeaWorld Rescue, who rushed to the scene and brought the sea lion to safety. The animal was rehabilitated at SeaWorld San Diego for just over one month before being returned to the ocean. 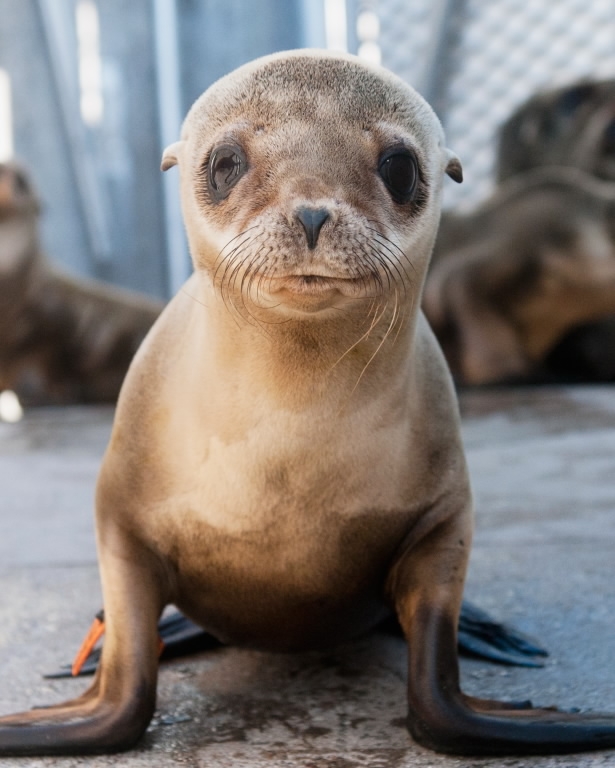 SeaWorld’s goal is always to return rescued animals to their natural environments. However, certain health conditions can make survival without human care unlikely or impossible. In those instances, wildlife authorities determine whether an animal can be returned and if not, zoos and aquariums like SeaWorld provide long-term care and permanent homes.

For example, each SeaWorld park has a sea turtle habitat that includes rescued sea turtles, each deemed non-releasable by wildlife authorities. SeaWorld San Diego is also a forever home to five southern sea otters initially stranded and rescued as part of the Monterey Bay Aquarium’s Sea Otter Research and Conservation program and deemed by wildlife authorities to be non-returnable. Providing long-term care to non-returnable animals enables guests in our parks to learn more about the specific challenges they faced in the wild.

It Takes a Community 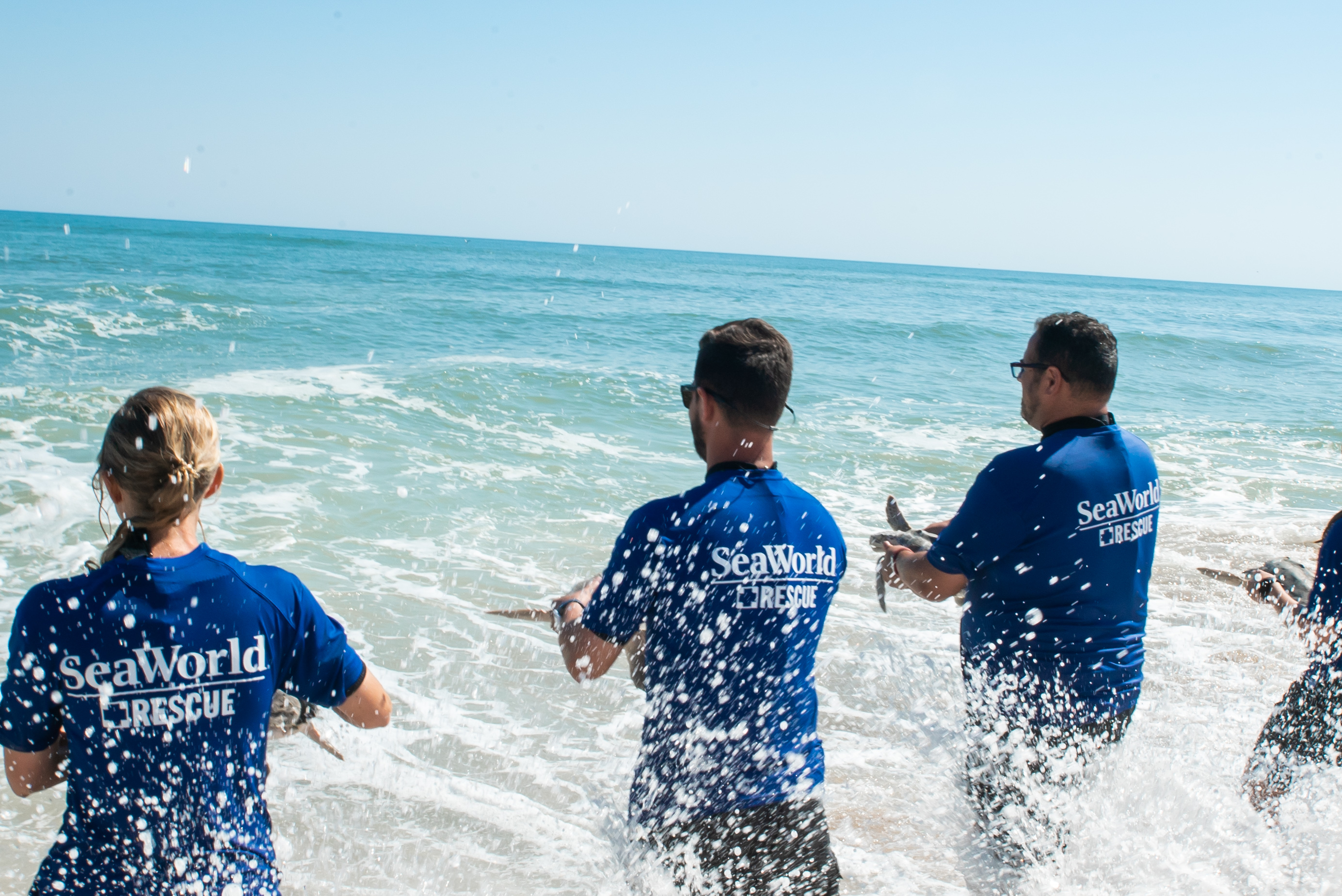 Many types of animals helped by SeaWorld are threatened or endangered such as six of the seven kinds of sea turtles, many species of coral, Florida manatees, California sea otters, and Guadalupe fur seals. Rescue and rehabilitation efforts can help mitigate species extinction.

Marine animal rescue is a community effort. SeaWorld is part of a large network that includes state and federal wildlife agencies (NOAA, USFWS), non-government animal rescue organizations, and other zoos and aquariums that work together to protect marine animals and their habitats.

Here is what some of them had to say about SeaWorld:

Justin Viezbicke, California Marine Mammal Stranding Network Coordinator in NOAA Fisheries’ West Coast Region said:“Marine animals face a number of threats in their daily lives, both manmade and from natural causes, and it’s a sad fact that when they become sick or injured, many of them will not survive without help. Dedication and support from organizations like SeaWorld is essential in ensuring healthy populations and we are proud to partner with them to work toward our common goal of marine animal conservation.”

Congressman Darren Soto said: “Since 1965, SeaWorld has been doing amazing work to protect endangered species, marine mammals, and other endangered sea life. I want to thank them for all their efforts and what they’ve done on behalf of the nation, on behalf of Central Florida, so that we can protect these critical species for the next generation.”

Assemblymember Chris Ward, District 78 said: “SeaWorld has a long history of rescuing, rehabilitating, and releasing animals dating all the way back to 1965. Today, San Diego is the most biodiverse area in the continental United States and the work that SeaWorld is doing is helping to keep that true for future generations to come.”

Chris Fischer, Founder of OCEARCH said: “What an amazing milestone that has been achieved by our partner SeaWorld: 40,000 rescues, rehabilitations and returned animals into the ocean. It is an unbelievable achievement, and when you pair this kind of looking after the animals of today to help build the abundant future with their support of pioneering research to manage towards an abundant future, you can see why when there’s a serious issue in the ocean, people call SeaWorld.”

Dr. Guy Harvey, Founder and Chair Emeritus of the Guy Harvey Ocean Foundation said: “In all the years that SeaWorld has been working with local communities, local vets and local organisations, it’s been to help improve the welfare of animals generally. What they do is remarkable throughout the different states in which their properties operate. I am very proud of our association with SeaWorld. Keep up the great work!”

Don Kent, Hubbs-SeaWorld Research Institute’s President and CEO said: “Most people do not realise that before there was a SeaWorld park, there was the Hubbs-SeaWorld Research Institute. Our team of experts provides innovative and objective scientific solutions to challenges threatening ocean health and marine life and we collaborate closely with the SeaWorld teams on scientific research and as ‘first responders’ in dolphin rescue. Without the support of SeaWorld, all our work and scientific breakthroughs would be impossible.”

SeaWorld Entertainment, Inc. (NYSE: SEAS) is a leading theme park and entertainment company providing experiences that matter, and inspiring guests to protect animals and the wild wonders of our world. The Company is one of the world’s foremost zoological organizations and a global leader in animal welfare, training, husbandry, and veterinary care. The Company collectively cares for what it believes is one of the largest zoological collections in the world and has helped lead advances in the care of animals. The Company also rescues and rehabilitates marine and terrestrial animals that are ill, injured, orphaned, or abandoned, with the goal of returning them to the wild. The SeaWorld® rescue team has helped more than 40,000 animals in need over the Company’s history. SeaWorld Entertainment, Inc. owns or licenses a portfolio of recognized brands including SeaWorld®, Busch Gardens®, Aquatica®, Sesame Place® and Sea Rescue®. Over its more than 60-year history, the Company has built a diversified portfolio of 12 destination and regional theme parks that are grouped in key markets across the United States, many of which showcase its one-of-a-kind zoological collection. The Company’s theme parks feature a diverse array of rides, shows and other attractions with broad demographic appeal which deliver memorable experiences and a strong value proposition for its guests.