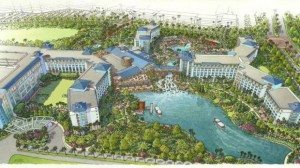 Sapphire Falls, which will be tucked between Universal hotels Royal Pacific and Cabana Bay Beach Resort, will be built around a lagoon and waterfall structures. Other amenities will include a 16,000-square-foot zero-entry pool with white-sand beach, water slide and cabanas.

Universal also has released some details about dining options at the new resort. Choices will include Amatista Cookhouse, a Caribbean-inspired restaurant with open kitchen and outdoor dining; Strong Water Tavern, a lobby lounge overlooking the hotel’s towering waterfalls and featuring a tapas-style menu; Drhum Club Kantine, a poolside bar and grill; and New Dutch Trading Co., a quick-service marketplace.

Sapphire Falls will be a “preferred on-site hotel,” Universal says. On the company website, that category also includes Royal Pacific. Although amenities to the new resort includes early entry to the Wizarding World of Harry Potter attractions, the site does not list Universal Express, the parks’ front-of-line perk, for Sapphire Falls.  That benefit is listed for Royal Pacific and the two “premier” resorts, the Hard Rock Hotel and Portofino Bay Hotel.

The resort will be the fifth in partnership with New York-based Loews Hotels & Resorts. It will bring the total number of hotel room at Universal to 5,200.