Fun Spot’s longstanding Ferris wheel, featuring rounded gondolas and the International Drive attraction’s name arched across its expanse, is being dismantled to make room for a brand-new wheel with flashier lighting.

“That thing’s been such a workhorse. It’s ridden millions of people on it. So many first kisses and dates on that thing,” John Arie Jr., Fun Spot’s CEO, said. “Today I showed up at work and went up to the office. …. It wasn’t moving, and all the gondolas were gone. I said ‘Wow, it’s a sad day for Fun Spot.” 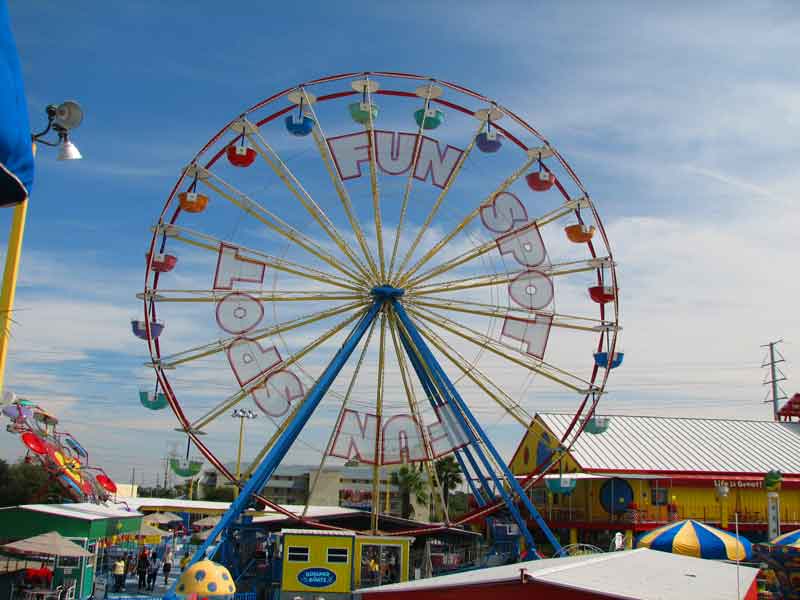 The 100-foot wheel was the first ride purchased for the attraction, he said, back in 1997, before the park opened. It was manufactured in 1987, Fun Spot records show.

“We furbished it and repainted it at my dad’s house in Oviedo,” Arie said. “It’s been a part of us since day one.”

The gondolas already have been removed from the ride – as well as the F in FUN SPOT, leaving just UN SPOT on the ride Tuesday afternoon. The dismantlement should be complete within two weeks, Arie said.

The replacement wheel, manufactured by Technical Park, is about the same size as its predecessor but comes with an elaborate lighting package.

“It’s going to be a nice addition to the north end of I-Drive, for sure,” said Arie, who is known for TV ads with the “It’s huuuuuuuge” catchphrase. “Hopefully it will attract more people on this end as well.”

The old wheel has been sold to another attraction, he said. Retrofitting it with new lights could have cost between $300,000 and $400,000, Arie said..

“At that point, we’re weighing out the time and the effort and everything from our maintenance team and we just made the decision to go ahead and get a new wheel,” Arie said.

“It’s got an unbelievable light package. I mean this thing is like a fireworks show. Everybody that sees it just loves it,” Arie said.

The goal is to have the new wheel operating in Orlando in early June, he said.