Home » “Rivers of Light” Flows Forth 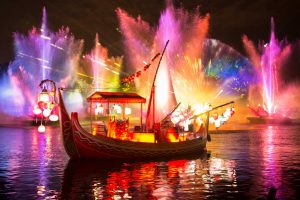 The much vaunted show, set on the park’s Discovery River, was originally planned to launch on Earth Day back in April 2016 but its grand premiere had been delayed for unspecified reasons.

“Rivers of Light” was first mentioned way back in October 2013 as an unnamed nighttime show with live music, water screens and “swirling animal imagery.” In early 2016, an official launch date of April 22 – Earth Day and Animal Kingdom’s birthday – was announced, but in early April the show and other new nighttime activities, including a night-timeversion of the park’s very popular Kilimanjaro Safaris, were all postponed.

At the time Disney said the delay would “give the team more time to bring these innovative experiences to life in a way we know will exceed our guests’ expectations.”

It was not until late in 2016  that Disney cast members were able to watch a full preview of “Rivers of Light”. Curtains of water with projections of animals, floating barges with illuminated animal figures, giant drifting lotus blossoms with enclosed water features and a soaring soundtrack could be seen in video posted from that production, which did not include fireworks.