Home » Trucking Along On Reign Of Kong….

Orlando Attractions Update – Universal Orlando Resort has  revealed big news about its King Kong attraction: The ride vehicles for Skull Island: Reign of Kong, opening this summer at Islands of Adventure theme park, are … huge. And they won’t be riding on a rail. 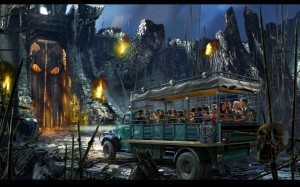 Released details for the Skull Island trucks indicate that they will hold up to 72 passengers in 12 rows. They will be 40 feet long, 13 feet tall and weigh in at 17 tons.

According to the attraction storyline, the vehicles will be used to transport theme-park visitors to the homeland of Kong, also the home base to an array of other creatures. The adventures will come about in a new way for the park.

“This is Universal Orlando’s first trackless ride vehicle,” Mike West of Universal Creative says in a “Making of Skull Island” video. “When you depart on your adventure to Skull Island: Reign of Kong, there won’t be a rail or track in sight.”

West also says that “behind the wheel” will be one of five different drivers, each with a different story, which will make for varied experiences on the attraction. Drivers include Becky (a cowgirl), Will Denham (adventurous cousin of a movie director), Jinks Costanza (ex-con from New York City), Kalana (descendant of the island’s natives) and Doc (paleontology student).

Universal has not revealed an opening date for Skull Island, which has been erected between the Jurassic Park and Toon Lagoon sections of IOA.