Universal Orlando Resort may be actively looking to improve the experience on the Hogwarts Express ride. Universal City Studios LLC, a sister division of Universal Orlando Resorts, has filed a patent entitled “Display for immersive window effect”. It looks to improve on the curved windows or displays used on attractions by adding more angles of perception to the overall video playing that guests see when on rides. Imagine being on a ride and looking out the window and being able to see what was coming or what the rider just left behind, which would make the ride ‘feel’ more realistic. 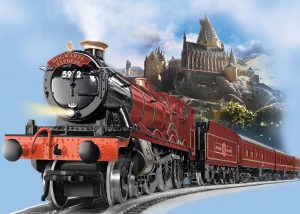 Here’s how the patent described the window’s effect:

The displays of the present disclosure additionally or alternatively enable the guest to look to the right and to the left, and thereby view additional, different sections of the landscape. For example, if the guest is in an attraction where the display is a window in a train car, the guest might look to the left to see a view of the landscape that is oncoming (e.g., a forward portion of a path and a forward section of the train and tracks), while if looking to the right, the guest might see a view of the landscape that has just passed, along with a rearward section of the train and tracks. Indeed, the simulated landscape may also move horizontally, vertically, or in any direction relative to the observing guest to simulate a changing landscape associated with a real or simulated movement of a passenger platform.

This would potentially be a marked improvement from regular two-dimensional displays used in attractions. The patent described those 2-D displays as only providing an immersive experience when the viewer sees it from an appropriate angle and distance, but that immersion is broken if the viewer gets closer.

The immersive windows also could be used in shops or retail areas, which makes it seem like guests could look into storefronts and maybe see simulated activity inside.

Images provided in the patent show how this could be used for a train attraction that resembles the Hogwarts Express ride that connects Universal Studios Florida’s London and Diagon Alley areas to Islands of Adventure’s Hogsmeade area.

The windows used on the train currently are curved in nature, but it does not display any forward or backward perspective angles. The curved display resembles more of curved commercial TVs that are used to make the viewer feel like they are surrounded by the screen, but doesn’t provide more angles of perception.

Universal has filed several patents in recent months on new attraction technology as it moves forward on new rides. Not every patent will come to fruition, but it does give us a peek at what ride designers are tackling to create the next cutting-edge attractions.