The  Planet Hollywood Observatory at the Disney Springs dining and entertainment district is now officially open for business……..and featuring burgers the like of which you’ve never seen before! 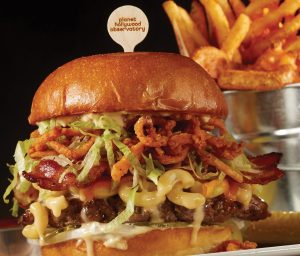 Planet Hollywood, which was closed for much of 2016 while the work took place is one of many spots at Disney Springs getting a total revamp.

It also has a completely remodeled menu with burger and sandwich selection curated by larger than life celebrity food personality Guy Fieri – he of the bleached blond spikey hairdo!

With the re-opening, Planet Hollywood has moved from that very recognizable 1990s era, globe-shaped building to this very intriguing turn-of-the-20th-century observatory vibe.

Owner Robert Earl, never one to do things by halves,  said the renovation has cost the Orlando-based company about $25 million, . The restaurant will be open for lunch beginning at 11 a.m. & will take dining reservations at late as 10:45 p.m.

Guy Fieri’s menu features crowd pleasers such as the Mayor of Flavortown sandwich or a no nonsense burger called the Straight Up with Cheese. There’s also some lighter fare for those not wanting to indulge too much on their vacation.