Home » Orlando’s Own Game Of Thrones

Medieval Times is a terrific hybrid of a fairy tale and an action movie – Orlando’s own Game of Thrones. Chivalry, showmanship, music and romance – punctuated with the clash of steel and the splintering of wood. It’s all about the thumping of young hearts and the thunder of hooves – a full on evening that keeps you on the edge of your seat! 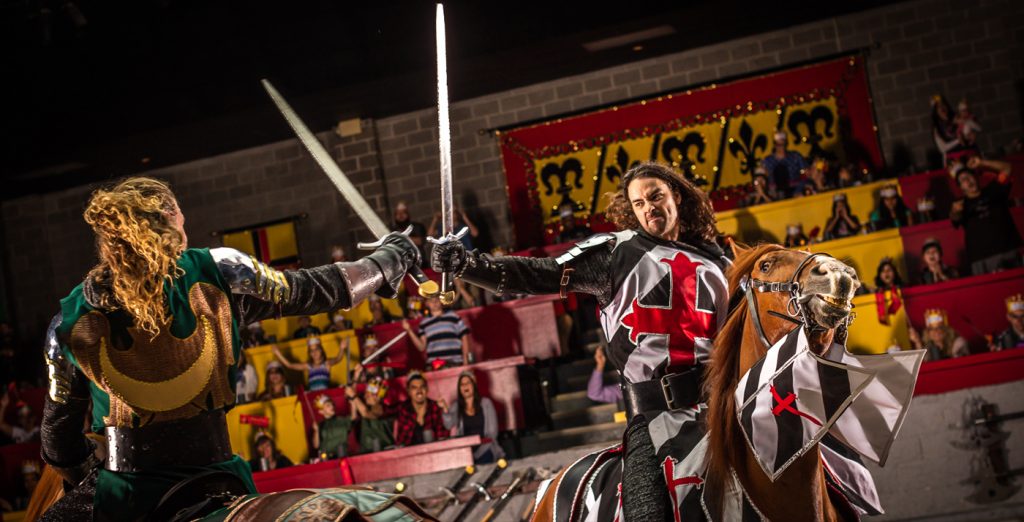 For the first time in Medieval Times’ 34-year history, a queen has taken the throne. Her Majesty Dona Maria Isabella presides over a tournament of knights who gather in celebration to test their skill against one another in a series of games, jousting, and combat.The new story brings a series of changes to the show including new costumes, custom-designed and handmade armor, fight scenes, and musical score. 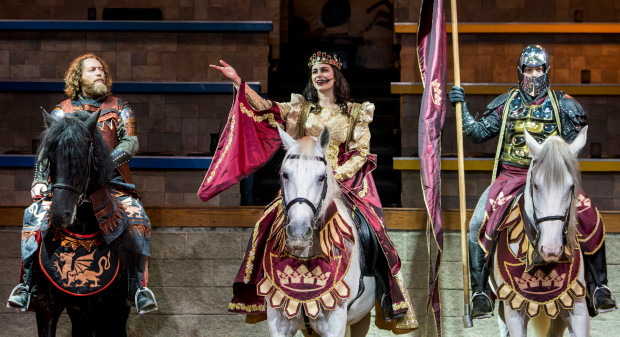 This is a family dinner attraction inspired by an 11th-century feast and tournament – guests are served a four-course meal (eat with your fingers kids!) and treated to dramatic sword fights and spectacular jousting tournaments. Depending on your seating, you cheer for one of six big beefy knights, many of whom have been training for a year to try to become the Queen’s Champion.  DISCOUNT TICKETS

It’s a non-stop blur of a show featuring heroic knights on immaculate horses displaying some astounding athletic feats and thrilling swordplay that have become hallmarks of this unique entertainment experience. A sweeping musical score and brilliant lights provide a fabulous backdrop for this fun evening of entertainment. 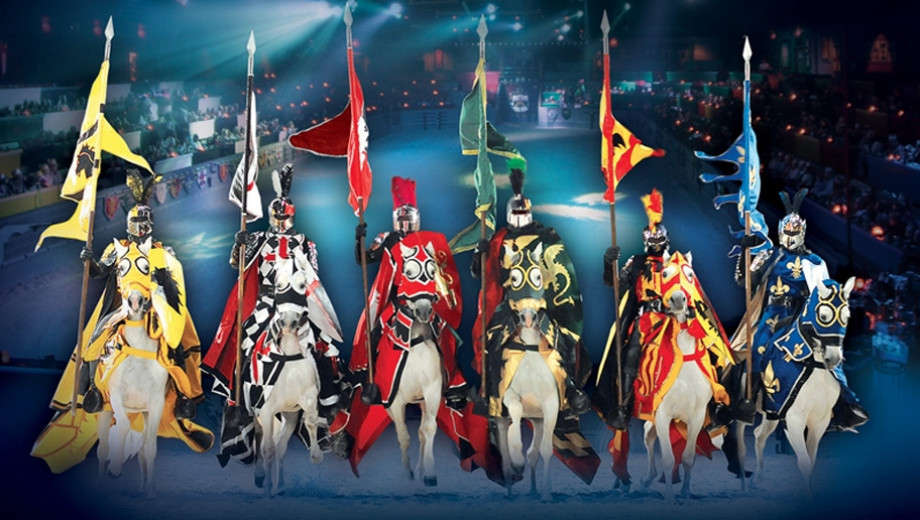 In the Hall of Arms, guests can admire the elaborate Medieval décor. There are coats of arms for many prestigious families and a spectacular array of Medieval weaponry; as well as a Museum of Torture, which features reproductions of torture instruments used during the Middle Ages.

As the festivities begin, trumpeters herald the guests into the Grand Ceremonial Arena where they are seated in one of the six color-coded sections corresponding to the colors of one of the daring Knights. Serfs and wenches attend to every need of the guests who feast on a four-course dinner in true Medieval, pre-silverware fashion.

The arena quickly fills with the thunder of hooves as the Queen of Arms lends the cast through a spectacular display of equestrian skills and Medieval pageantry. The pace quickens as the Tournament of Games begins. The valiant Knights on horseback face their competition in games of skill, such as the ring pierce, flag toss, and javelin throw.

The experience culminates as trumpeters summon the Knights of the Realm for the Tournament Royal. Guests join in the revelry and fun as they cheer their own Knight to victory in authentic jousting matches and dangerous sword fights. Following the evening’s final show, guests have the opportunity to receive autographs and mingle with cast members in the Hall of Arms.

Six of the best is what you can expect – brave, brawny and ready to do battle in order to be the Queens champion.

“In myth and in legend, the Knight and the horse are forever linked. Few things are held in such great esteem by the Medieval warrior than a stalwart horse, who possesses the bold courage of his master and the quiet strength of his ancestors.”

Medieval Knights use two types of swords. The Espada is a one-handed, short sword used on horseback or in combination with a shield or another weapon. The Mandoble is a longer, heavier, two-handed sword used by knights on foot to deliver powerful blows.

A lance is a weapon used in battle or tournament. A knight uses a lance to knock his enemy from the horse. After the sword, the lance is the knight’s primary offensive weapon.

An alabarda is a cross between a battle-axe and a spear. It is used by foot soldiers to keep the enemy at a distance. A point is added to the back of the weapon so if the enemy was missed on the forward stroke, he could be stabbed with a backward thrust.

A mace is a heavy weapon made of a wooden handle with a quatrefoil-shaped head. The mace delivers a crushing blow to an opponent’s armor with a single strike.

The young foals on the Medieval Times ranch are attended with the best veterinarian care from the moment they come into the world. As soon as the yearlings are ready, training begins with simple steps, like an introduction to lead ropes and halters. Once they understand how to work with the ropes and halters, which generally takes a year or two of gentle workouts, they’re ready to graduate to saddle training. Long reins and simple exercises such as lunging follow.

Around the age of three, the horses move to their new homes – one of our royal castles – where they find clean, comfortable and secure stables fit for a queen. At the castle, they continue their training and learn advanced-level dressage from the Master of Horses

Each horse works with a specific group of knights. This bonding in the form of daily walking and riding, can take weeks or months. But, once the bond is made, the rider and the horse become one in the performance, expressed in grace, strength and speed. The Master of Horses ensures the health and happiness of the horses, who can serve a knight for 12 years or more. The Master of Horses tends to the castle’s stables, ensuring all the horses are comfortable, clean and fed with the finest hay and grains in the kingdom.

Falconry is all about patience, trust and caution. The Royal Falconer at Medieval Times must embody all of these traits. Stop by the castle mews to take a closer look at these majestic birds. The Royal Falconer takes pride in talking to the Queen’s guests about how the art of falconry pre-dates the Middles Ages and has played an important role in the survival of both man and bird.

Queen Maria Isabella welcomes you to dine with her and her royal court. Always a generous host, the Queen has commanded her royal chefs to cook her favorite meal just for you.

With your meal, you will have a choice of the non-alcoholic beverages of the castle. In addition, our cocktail servers will be making the rounds and are happy to deliver any spirits from the bar that you request.

This is the perfect place for a boy scout troop or the office outing. Student groups or seniors everyone has a blast! Celebrating a birthday or an anniversary – the perfect package awaits, so make a memorable ‘knight’ of it on your special occasion!

Medieval Times is based upon authentic Medieval history and is the true story of a noble family with documentation dating back to the 11th Century. Medieval Times began with two dinner/ entertainment complexes located in Majorca and Benidorm, Spain. The first North American Castle in Kissimmee, Florida opened in December 1983. Medieval Times’ Castles have since entertained more than 60 million guests.