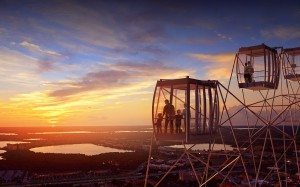 is getting a new name: the Coca-Cola Orlando Eye.

Details about the rebranding will be released July 28, when Robin Goodchild, the observation wheel’s general manager, and Desiree Wilson, senior customer marketing manager for The Coca-Cola Company, will host a media event.

An update for the 400-foot observation wheel on International Drive comes about 14 months after the wheel opened. Orlando’s wheel, located in the I-Drive 360 entertainment complex, is the sister wheel of the Coca-Cola London Eye, which has become a landmark on the Thames River in the heart of the city.

That attraction opened in 2000 as the London Eye with a five-year operating permit and became permanent. A deal between Merlin Entertainments, the wheel’s operators, and The Coca-Cola Company was inked for that partnership in 2014.

Orlando’s wheel is also owned by Merlin Entertainments, a U.K.-based company that also operates the Madame Tussauds wax museum and Sea Life Aquarium Orlando, both of which are located in the same terminal building as the Orlando Eye.