Home » Orion Spacecraft To Lift Off From KSC…

Orlando Attractions Update – On Thursday, Dec. 4, NASA is scheduled to launch its uncrewed Orion spacecraft into space for the very first time, making history as the spacecraft travels 15 times farther from the Earth than the International Space Station (ISS). This first flight paves the way for future flights that will carry astronauts to asteroids, Mars and beyond. Now, Kennedy Space Center Visitor Complex is giving its guests the chance to share in this historic mission, called Exploration Flight Test-1, or EFT-1, with a variety of exclusive launch viewing opportunities and special events. 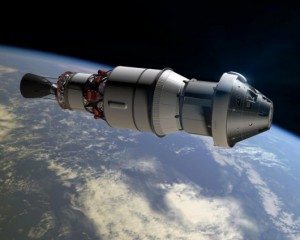 Guests at the Visitor Complex will be able to see the fiery glow and hear the thunderous roar as the United Launch Alliance Delta IV Heavy rocket lifts off from Space Launch Complex 37 at Cape Canaveral Air Force Station. Not only will guests get to experience the sights, sounds and sensations of a rocket launch from within miles of the launch pad, they will also witness firsthand the dawn of the next space exploration program that will one day send humans to and from Mars. The two-orbit, 4.5-hour flight is designed to test the systems onboard the Orion Spacecraft that are critical to safely sending humans into deep space – systems including avionics, attitude control, parachutes and the heat shield.

As guests will see and hear, traveling 3,600 miles into space requires one of the most powerful rockets ever built. The nearly 235-foot-tall Delta IV Heavy is capable of lifting more than 50,000 pounds into low-Earth orbit. After jettisoning its Launch Abort System and making one orbit of Earth, the rocket’s upper stage will fire again, taking the spacecraft farther than any vehicle designed for manned flight has gone in more than 40 years.

During its journey the Orion Spacecraft will twice pass through areas of extreme radiation called the Van Allen Belts. As it reenters Earth’s atmosphere, it will travel at speeds close to 20,000 mph and generate temperatures up to 4,000 degrees Fahrenheit, almost twice the temperature of molten lava – putting its heat shield, the largest of its kind ever made, to the ultimate test. Three sets of parachutes are needed to slow the Orion capsule to a gentle 20 mph splashdown in the Pacific Ocean, where the U.S. Navy and NASA’s Ground Systems Development and Operations Program will recover it and the flight data. In the future, Orion will launch on NASA’s new heavy-lift rocket, the Space Launch System (SLS).

Launch viewing, astronaut appearances, live mission control commentary and a variety of Orion-related displays, demonstrations and exhibits by various NASA contractors are available at the main Visitor Complex. Join John Zarrella, former CNN space expert and correspondent, for the Journey with Orion program leading up to launch and the Countdown to Splashdown program later in the day. Prime launch viewing areas, 7 miles from Launch Pad 37, are located on the north side and east side of the Space Shuttle Atlantis attraction, where guests will have a view of the rocket once it clears the tree line. This viewing opportunity is included in regular admission.

“We are excited to share this historic launch with our guests and to give them the chance to see firsthand how NASA continues to push farther into space with the Orion program,” said Therrin Protze, chief operating officer of Kennedy Space Center Visitor Complex. “This is only the beginning of the story for Orion and we look forward to sharing many more successful chapters on the journey to Mars.”