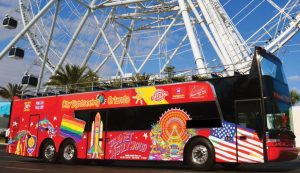 The company decided on an established global franchise based in Spain — City Sightseeing — to launch the new service.True an open top vehicle could be a hard sell during the heat and torrential downpours of Central Florida’s hurricane season, but the good news is that the lower deck is completely covered for such occasions.

The new, red and yellow buses will offer two types of service:

• Hop-on, Hop-Off service with 18 stops, such as Universal Orlando Resort, Disney Springs, Florida Mall and Premium Outlets. Tickets are $28 per day for adults and $20 for children ages 3 to 12. A week pass is $75 for adults and $60 for children. Scheduled service will also start on International Drive serving Pointe Orlando, I-Drive 360 (Orlando Eye), the Orange County Convention Center and SeaWorld.

• Theme Park Express service, which is $14 per day to Disney and $8 per day to Universal.

City Sightseeing says it was created in 1999 in Seville, Spain, starting with four tours in 2000, and is now in almost 100 locations worldwide, including New York, New Orleans, Berlin and Barcelona. nFlorida Dolphin Tours has been in business for 20 years and offers bundled vacation packages to visitors from all over the world.