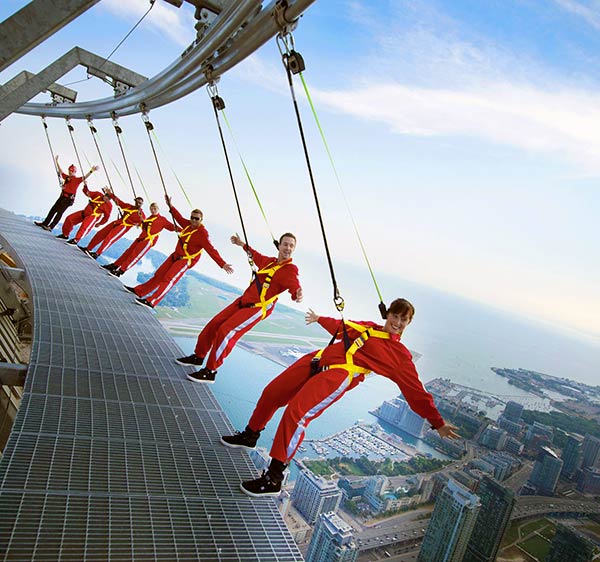 International Drive Update – For those of you still looking for another bigger and better thrill in Orlando the folks developing the Skyplex attraction on International Drive don’t want to disappoint! They have announced plans to bring yet another attraction to the $460 million entertainment, retail and dining complex.

SkyLedge (a moniker that just reeks of vertigo!) will allow intrepid guests to put on a safety harness and actually walk along the outside of the Skyplex tower 600 feet above Orlando’s world famous International Drive. Skyplex executives said this type of attraction will be the first of its kind in the USA. The CN tower in Toronto canada (pictured) has a similar attraction, called EdgeWalk, allowing tourist to walk along its exterior and at one point lean out backwards over the void underneath them!

“We’re creating a new destination, remaking International Drive, and we’re thrilled to be the first location in the United States to offer this attraction,” said Joshua Wallack, the developer of the Skyplex complex, in a prepared statement. “The world’s tallest rollercoaster, the world’s tallest drop ride, and now we’re launching an experience that feels like you are flying. You will be one with the sky and we envision this to be a major draw for tourists and convention delegates to the new I-Drive Entertainment District.”