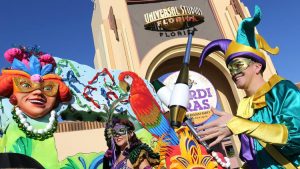 Universal Orlando – The 2017 edition of the Fat Tuesday-inspired celebrations just got even fatter!

Universal Studio’s Mardi Gras event will run for 49 consecutive nights, complete with the festive bead-happy parade happening each of those evenings. In comparison, last year’s Mardi Gras ran for 14 nights, primarily on Saturdays.

There will be a parade every night during the celebration at Universal Studios and there will be 12 concerts during next year’s Mardi Gras, although the lineup has not been announced. A post on the official Universal Orlando Resort blog says the acts will be revealed 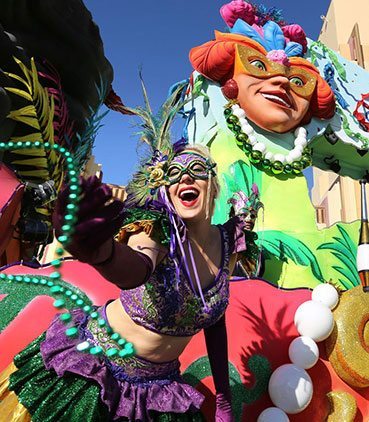 “in the next few months.” Bands from New Orleans will perform each night of the 2017 event, and authentic Cajun food will be for sale in the park’s French Quarter Courtyard each evening. Dates for 2017 Mardi Gras are Feb. 4 to March 24. The parade and concerts are included in regular theme park admission.

In the meantime, Universal Studios is in the midst of its Halloween Horror Nights event, which runs select nights through Oct. 31. And end-of-year holiday activities — running from Dec. 3 to Jan. 1 — will include Grinchmas at Islands of Adventure, the Macy’s Holiday Parade at the Studios alongside six Mannheim Steamroller concerts on Dec. 3, 4, 10, 11, 17 and 18. Get an inside look at the newest floats, performers, and tasty treats at Universal Orlando’s Mardi Gras 2016 celebration with featured interviews from Jason Horn, Show Director, and Steven Jayson, Executive Chef.