Orlando Attractions Update – Mako, the upcoming shark-inspired roller coaster at SeaWorld Orlando, has reached a construction milestone. The thrill ride was topped out Wednesday and is scheduled to debut this summer. 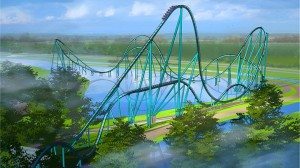 Workers moved the uppermost part of the attraction — the peak of its 200-foot lift hill — into place. When complete, will be the tallest roller coaster in Central Florida.

SeaWorld also has touted the amount of air time that the hypercoaster’s design will give riders.

Mako will be the third full-size roller coaster at SeaWorld Orlando joining Manta and Kraken. It’s slated to open in 2016.