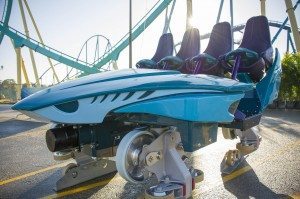 “I have scientists, doctors and educators sitting at my table, a creative core, from day one,” said Brian Morrow, SeaWorld’s vice president for theme-park experience. Some details match the physiology of a real mako shark. The animal and the ride vehicle has five gills, whereas most sharks have six, Morrow said.

“That’s actually a very unique point of difference of this particular species of sharks,” he said.

Designers do hand sketches, proceed to digital modeling and then the idea is sent overseas for manufacturing, Morrow said.

“They hand-carve it, we approve it and then it comes back the way it is,” he said.

Mako will be the third full-size roller coaster at SeaWorld Orlando joining Manta and Kraken. It’s slated to open in 2016.

The cars will have no shoulder restraints, depending on individual lap guards to keep riders on board.

“This allows for everything above your waistline to be free. You can lean forward, you can lean backwards and you really get to experience the freedom of the weightlessness,” Morrow said.

Riders will sit four across. Each train will have seven cars, making for 28 passengers per train. SeaWorld will have three trains for Mako. The lead car eventually will have a SeaWorld logo plus additional graphics representing the movement of water, Morrow said.

SeaWorld has touted the ride’s “air time” along with it becoming the longest, fastest, tallest roller in Orlando.

That floating sensation is “what every coaster fan covets,” said Chris Kraftchick, regional representative for the Florida Region of the American Coaster Enthusiasts. Mako’s seat design is a good choice, he said.

“Basically, as you’re navigating the hills, you’re allowed to float up and down and you’re not really being jammed into some steel bar or overly padded seat,” he said.

Magnetic brakes and polyurethane wheels cut down on friction, which will help deliver a smooth, shark-like experience, designers said.

Mako will be the centerpiece of a new shark-based land, although SeaWorld has not yet revealed the name of that area. It will have an ocean floor/shipwreck theme, Morrow said, and there will be educational aspects that cover the many species of sharks — more than 400 — and the obstacles they face in the wild.

A precise opening date for the thrill ride and its land has not been announced. This will mark the first major addition to SeaWorld Orlando since opening the Antarctica: Empire of the Penguin attraction in 2013.