Orlando Attractions Update – Guests at Walt Disney World guests are now incorporated into the finale of the “It’s A Small World” ride at Magic Kingdom, thanks to their MagicBands. 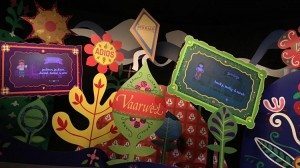 The Orlando Sentinel reports that the final scene of the Fantasyland attraction has signs with the words for “good-bye” in multiple languages. There are also three big screens built in to display the names of the people in the ride boats.

The effect is triggered by activated MagicBands in those boats, a Disney World spokeswoman confirms. A FastPass reservation is not required to get a name up on the board.

This “surprise and delight” moment at “small world” could be part of a series about which that Disney creative types have hinted. For instance, princesses and other characters might be able to address guests by their names without asking through the magic of MagicBands.

Riders should look quickly as the three screens are on each side of the waterway and could, in theory, need to run through 24 names per boat as they float toward the exit.

The screens with names also sport a figure that resembles the hundreds of audio-animatronic children singing and dancing in the attraction, which opened with Magic Kingdom in 1971.

The “small world” addition is the latest power given to MagicBands, which were introduced at Disney World in 2013. So far the bracelets (with chip technology) mostly have been used as theme-park tickets and FastPass+ attractions reservations. Visitors staying at a Disney World hotel can use MagicBands as room keys and make charges to their room accounts while shopping in Disney theme parks.  The MagicBands also can now be linked to Disney’s PhotoPass system.

Initially, the bands were available only in select, solid colors. Since then, Disney has developed hundreds of designs that feature characters, theme-park locations, movies and special events.