Orlando Attractions Update –  What’s big, black and white and very hairy? Over at I-Drive 360 Madame Tussauds Orlando has added a wax figure of Po, lovable warrior in the “Kung Fu Panda” movie series, to its lineup. Visitors to the International Drive attraction can now see and pose with the character. 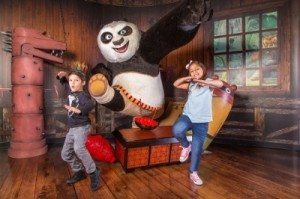 His Orlando debut coincides with the opening day “Kung Fu Panda 3” in theaters.

Po is a big boy. The figure weighs 160 pounds, and his fist is almost a foot long, Madame Tussauds’ people say.

His shorts are made from three types of silk and a jacquard fabric, specially died to match the look of his clothes in the animated feature. More than 120 square feet of synthetic black and white fur were used for Po’s figure

Other recent additions to Madame Tussauds, which is located in the I-Drive 360 complex, include guitar-toting country singer Keith Urban and four members of the British royal family, including Queen Elizabeth II, Prince William, Duchess Catherine and Prince Harry.

The attraction is currently running a special Florida-resident rate. Admission for Floridian is $18 ($13 for ages of 3 to 12). That is about 25 percent off regular admission. Guests must present valid proof of residency, such as a state-issued ID, utilities or cable bill, bank statement, library card or recent pay stub.

For more information, go to OfficialOrlandoEye.com