Home » New Hotel To Sit on Top Of Skyplex Orlando…..

Orlando Attractions Update – According to the Orlando Sentinel a 350-room hotel and a restaurant atop the Skyscraper roller coaster were among new details released Wednesday about the proposed Skyplex Orlando entertainment complex on International Drive. 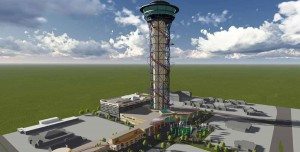 Joshua Wallack, managing principal for the project, discussed plans for the complex during an Orange County community meeting about the latest I-Drive project.

“Sometimes I don’t believe that this is real,” said Wallack. “But it is.”

The restaurant would sit above an observation deck that will be built above the 500-foot-high Skyscraper roller coaster, which would be the tallest coaster in the world, Wallack said at the rezoning meeting.

He hopes to begin site work in the fourth quarter of this year, with plans to open Skyplex Orlando in 2017.

The complex, to be built on seven parcels of land at the corner of Sand Lake Road and International Drive, has cost $50 million in land acquisition, said Wallack.

Two other attractions are planned for the development including the SkyFall, a drop ride to be constructed inside the roller coaster’s frame work, and SkyFly, a zip line from the top of the roller coaster to the ground.

During the meeting, concerns were raised that the numerous tall, one-off developments being opened and planned along I-Drive are steering the tourist corridor in the wrong direction.

“We need to be strategic about how we allow these projects to come through,” said Susan Godorov, with Pointe Orlando.

Godorov serves on the I-Drive Steering Committee/Technical Working Group, a committee formed by Orange County Mayor Teresa Jacobs to create a “comprehensive vision” for the drive.

“We have the best interest of I-Drive in mind,” said Wallack. “Not just our complex.”

“It’s the risk takers that ultimately make things happen,” said Helman, whose firm is the architect attached to Skyplex.

The tower housing the roller coaster and restaurant would top out at 700 feet, according to plans that must be approved by the FAA. Wallack wants Orange County to rezone the land from C-2 to planned development.

The 11.46-acre  Skyplex Orlandosite will also include two parking garages.

One two-story garage would be accessible from the corner of I-Drive and Sand Lake, said Wallack, and feature a pedestrian walkway. The second, which would have 2,400 parking spaces, will be off Canada Avenue.

That restaurant space includes a 10,000-square-foot Perkins, a restaurant already located at the I-Drive and Sand Lake intersection.

No action was taken Wednesday. It could be months before the next time county planning officials discuss the issue.

Wallack said his plans would complement other development on I-Drive, including that of the I-Drive 360 entertainment complex, located south of Sand Lake Road.