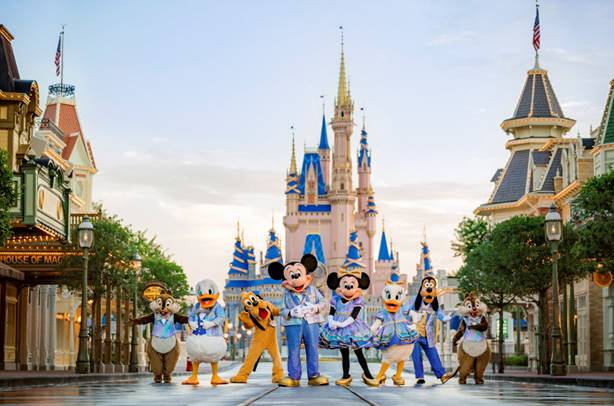 To celebrate Walt Disney World Resort’s 50th Anniversary, the resort is welcoming guests to ‘The World’s Most Magical Celebration.’The 18-month event beginning on 1 October 2021, ushers in a spectacular array of new attractions, EARidescent décor, nighttime spectaculars and much more. Please see below for some of the magical highlight moments that the epic 50th anniversary celebration has in store for guests:

New Nighttime Spectacular ‘Harmonious’ at EPCOT One of the largest nighttime spectaculars ever created for a Disney theme park, launches today at EPCOT. “Harmonious” takes EPCOT guests on a thrilling journey through new interpretations of classic Disney songs as they’ve never been heard before, inspired and influenced by cultures and people from around the world. The music plays amid choreographed moving fountains and lights, lasers, fireworks and other pyrotechnics bursting spectacularly above and around World Showcase Lagoon.

New ‘Disney Enchantment’ at Magic Kingdom Park – Debuting today, guests are invited to join dreamers like Princess Tiana from “The Princess and the Frog,” Miguel from Disney and Pixar’s “Coco,” Rapunzel from “Tangled” and more as they set out on a journey beyond the ordinary to a magic land filled with adventure, wonder, empowerment and enchantment. The breathtaking spectacle will feature Disney music, stunning fireworks, enhanced lighting and immersive projection effects that extend for the first time from Cinderella Castle down Main Street, U.S.A.

Remy’s Ratatouille Adventure – Today,  EPCOT will officially open an expansion to its France pavilion in World Showcase, the park’s latest example of imagination blending with authenticity to create new stories for guests. The family-friendly attraction invites guests into the flavourful world of Disney and Pixar’s Academy Award®-winning film “Ratatouille”, feeling as if they have shrunk to the size of Chef Remy and are scurrying through Gusteau’s famous restaurant.

New Space 220 Restaurant – The new restaurant in World Discovery at EPCOT is a culinary experience offering the celestial panorama of a space station, including virtual daytime and nighttime views of Earth from 220 miles above the planet’s surface.Guests board a space elevator for a simulated journey to the Centauri Space Station, where they experience the “height of dining.” Once they arrive, guests enjoy meals and drinks while taking in views that are truly out of this world.

50th Anniversary Celebration Sips and Bites – The magic is calling all Foodies to the Walt Disney World Resort 50th anniversary celebration – The World’s Most Magical Celebration! Throughout the four theme parks and beyond, Disney chefs and mixologists have created more than 150 sips and bites full of colour, whimsy, and a touch of EARidescent shimmer – with even more coming throughout the 18-month celebration beginning today. Of the 150-plus new items available, examples include:

Coming Soon! Guardians of the Galaxy: Cosmic Rewind – Launching 2022, Guardians of the Galaxy: Cosmic Rewind will be the first “other-world” showcase pavilion at EPCOT. The family-friendly adventure starts in the Galaxarium, a planetarium-like exhibition that explores the similarities and mysteries of the formation of Earth’s galaxy and Xandar. Guests will learn more about the treasures Xandar has to share – until the moment when the Guardians of the Galaxy arrive, and guests go on an intergalactic chase through space and time. The attraction will feature a new innovation from Walt Disney Imagineering – a storytelling coaster that rotates 360 degrees to focus guests on the action, including the first reverse launch on a Disney coaster.

Coming Soon! New MagicBand+ Wearable and ‘Hey Disney!’ Voice Assistant – Innovation is essential to The Walt Disney Company story, the two new technological achievements are destined to carry theme park and resort guests’ imaginations into the future – the MagicBand+ wearable and the “Hey Disney!” voice assistant. Both cutting-edge innovations will debut in 2022 at Walt Disney World Resort as part of the destination’s 50th anniversary celebration.

MagicBand+ – The next-generation MagicBand+ will retain those popular features and add new functionality to unlock experiential moments of magic throughout the Walt Disney World theme parks and resorts. After a guest enters a theme park, MagicBand+ will come alive at various times with colour-changing lights, haptic vibrations and gesture recognition, enhancing the environment’s immersive storytelling. The wearable will allow guests to engage with favourite Disney moments in new ways and discover new interactive experiences.

Please note, these new features are not available until Guests download the My Disney Experience App, which we do not encourage Guests to do until in Resort.

We’re excited to continue welcoming Guests and Cast Members back to our Disney Resort hotels, such as at Disney’s All-StarResorts, where we recently reopened the Music and Movies themes. At this time, Disney’s All-Star Sports Resort will remain closed while we take the opportunity to refresh the Sports theme area, and we look forward to sharing a new reopening date for rooms in the Sports theme at a later time.

“Finding Nemo — The Musical” at Disney’s Animal Kingdom Theme Park has been delighting our guests since 2007, and we’re excited to tell you a re-imagined show, based on the same beloved characters, will debut in 2022.

Although our Disney Live Entertainment team is still in the early stages of development for the show, the musical retelling of this underwater tale of family, friendship and kindness will feature new story material, as well as fan favourite songs such as “In the Big Blue World” and “Go with the Flow.”