Home » Eye-to- Eye with the Everglades.

It��s not every day you get a chance to pet a bull alligator in the wild. But here he comes, slinking towards our wooden skiff as we glide through a swamp in Big Cypress National Preserve. I look right into his eyes — and resist the urge to pat his spiny back. The gator seems not to notice me. It’s mating season; he has other things on his mind. 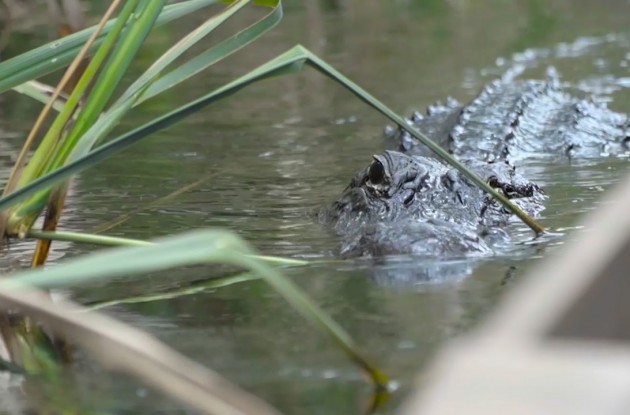 That’s just one of countless first-time encounters I enjoy during a late-spring excursion into the Everglades. Jack Sheely, a fourth-generation “Gladesman” who’s my guide during a three-day visit, navigates the boat with a crude pole made of cypress — a mode of Everglades transportation that dates back centuries.

Besides running Everglades Adventure Tours, Jack owns and operates the 38-acre Trail Lakes Campground on the south side of U.S. 41 in the village of Ochopee, just 40 miles from downtown Naples. Except for a post office the size of an outhouse, the place shows no signs of being an actual village.

Jack’s grandmother was Ochopee’s postmaster for decades. The camp property opened in 1962. Jack’s grandfather was a swamp guide. Everglades communities are stocked with families that have lived near the world-famous swamp for five, six, seven generations or more. They fish, hunt and go froggin’. They love a good yarn — telling and listening. Everglades dwellers are all about family and neighbors, but friendly to visitors.

A few decades ago, a major Everglades industry was running marijuana on fast, agile boats, eluding the law by zipping through its labyrinth of waterways. Jack, 33, is part of a generation that saw quite a few fathers spend time behind bars. Glades culture is, at least in part, an outlaw culture, which dates back to moonshiners, rumrunners and, even earlier, pirates in the 1800s.

“The first person hung [around here] on Coast Guard record was a Sheely,” Jack says with a grin. 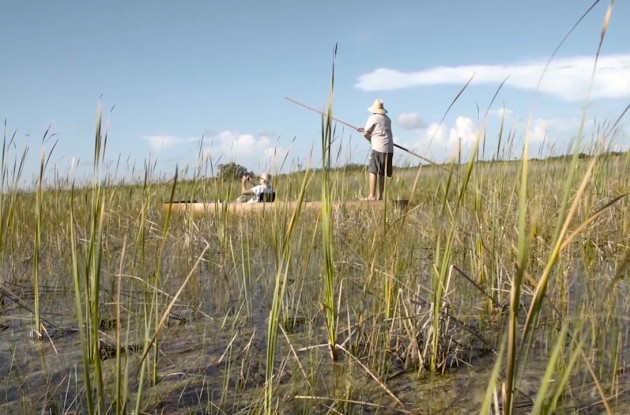 An entirely pleasant assault on the senses

We’re not concerned about outlaws as we shove off in Jack’s flat-bottom “dan boat” at 6:30 a.m., a classic beat-the-heat strategy. He mans the pole while I lounge in a low-slung beach chair with excellent lumbar support. Wide-brimmed straw hats protect our heads.

After we clear a few hundred yards of the narrow Turner River surrounded by dense mangroves, a city dweller like myself starts to notice things not usually noticed. A butterfly flutters around the skiff, as if along for the ride. The sounds — a symphony of birds, bugs, lapping water, rustling leaves, and the occasional loud bark of a pig frog — take front and center in the absence of traffic and urban din. 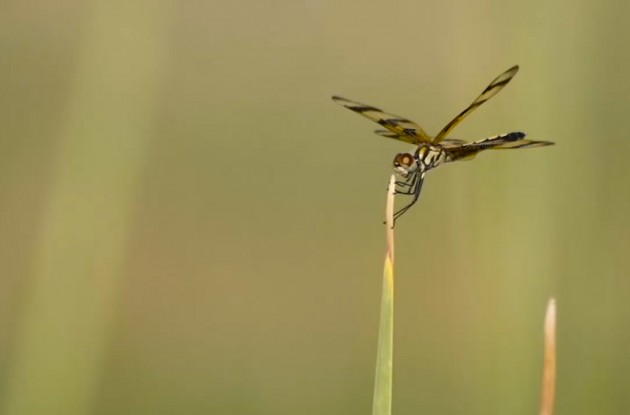 We tunnel through mangrove canopies and notice that the temperature drops a few degrees. A brief light rain cools us further. Everything smells fresh and alive.

A three-hour Everglades eco-tour amounts to a very pleasant assault on the senses. The experience all but forces you to slow your breathing, loosen your limbs, and bat away those rat-race thoughts. It’s easy to enter into a state of bliss. 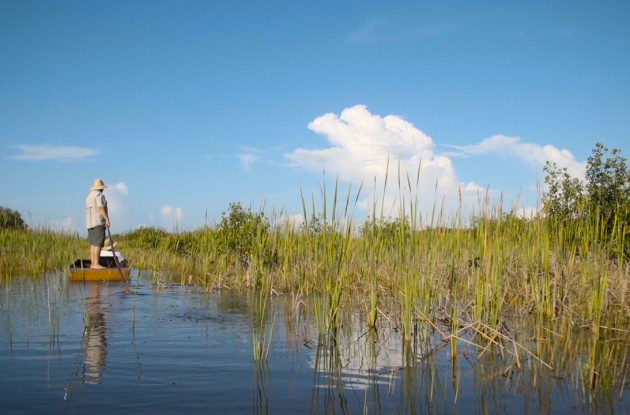 Navigating the River of Grass

During our tours, Jack takes us through three distinct ecosystems, from cypress swamp to mangrove forest to the Ochopee Prairie, a vast open expanse that author Marjorie Stoneman Douglas immortalized as the River of Grass. During our sojourns, we encounter no other boats, not a single other soul. That solitude is part of the idea — “to show people places where you’re not running into other visitors.”

“This isn’t Disney World,” Jack says. “There’s nothing staged. We’re around wildlife in its natural habitat.”

Jack makes his living in the tourist industry, but can’t resist the occasional provincial quip. “After all these years, we still have only two roads to get here,” he says. “We prefer to keep it that way — or get rid of ‘em both.” 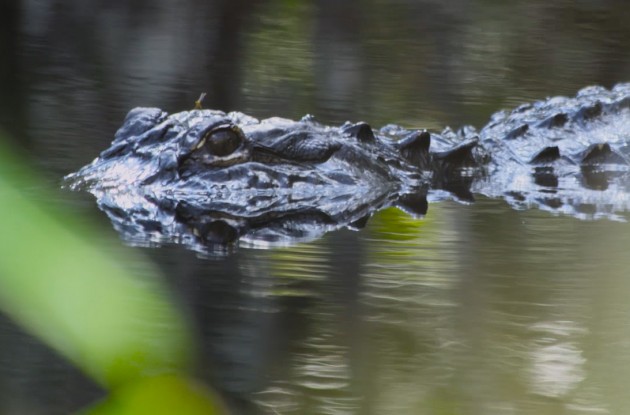 Side by side with wildlife

I confess to being a bit anxious when I spied that bull alligator cruising toward our boat. But I figured: Jack knows what he’s doing; he won’t let me become the gator’s breakfast. As the exotic creature moved past so close, I felt a wave of exhilaration.

Jack says he’s never had a dangerous gator incident, but there have been some funny moments. “It’s usually city folks,” he says with a sheepish smile. “This one time, we brought our guests near the launch and then went to set up the boat. When we brought the guests to the boat, a big ol’ gator had crawled up right next to it. They called the tour off right then and there.”

Everglades Adventure is all about providing low-impact eco-tours and coexisting with wildlife in their habitat, Jack says. Boats and humans are guests and should behave that way.

“We found that by investing years of having very casual encounters with these animals, they’ve slowly become accustomed to us being here,” he says. “Whenever we go into an area and see an animal there, we want it to be there when we leave. That guarantees that maybe when we come back the next time, it’ll be there again.”