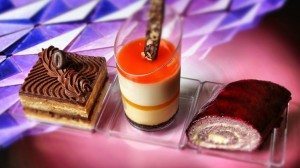 “And I hope I don’t for a really long time to come!” she laughed.

In fact, Brandon, who has authored a dozen Disney cookbooks and regularly writes about food for the Disney Parks blog, can remember what came before EPCOT’s 53-day celebration of all things tasty.

“It moved to EPCOT in 1996, that was the first year,” Brandon said. “Prior to that, Disney did these smaller wine festivals — and they weren’t food, they were just wine over in the Downtown Disney Marketplace, in the old conference center over there.”

The first festival was the Walt Disney World Village Wine Festival in 1981. Brandon said it was a small festival, but they still had incredible winemakers who came every year. But the only food they had is what you’d expect at a stereotypical wine event — cheese, crackers, grapes, that sort of thing.

“In 1992 they had 60 winemakers at that,” Brandon remembered. “And Fess Parker came in 1992. Then it moved from the Village to the Yacht and Beach Club, at the convention center. Same thing though — big trays of cheese cubes and grapes and crackers, but incredible wine.”

A 1997 map showing all of the marketplaces at EPCOT Food and Wine Festival. (Disney)

The person who is really responsible for taking that wine event and moving it to Epcot is George Kalogridis — now president of Walt Disney World. In the 90s, Kalogridis was vice president of operations at EPCOT. Disney was already bringing festivals to Epcot — The Flower and Garden Festival began in 1994, and Disney brought the Candlelight Processional over from Magic Kingdom for Christmas time.

Brandon believes the backdrop of the World Showcase suits the Food and Wine Festival perfectly. The showcase already focused on global cuisine in its restaurants, and on a grand scale too. For instance, Les Chefs de France was opened in 1982 by Chef Paul Bocuse, one of the most celebrated chefs in the world. His son Jerome now runs the restaurant. Another restaurant, Monsieur Paul, which opened in 2012, is named after Bocuse.

The festival started as a 30-day festival with 25 kiosks, each offering a taste of food from around the world. They also had some of the seminars and the demos that are such a big part of the festival now. The festival also brought in some well-known chefs — John Ash, Tom Colicchio, Todd English, Bradley Ogden and Patricia Wells, to name a few.

“The very first year it launched with a bang, it was a very big deal,” Brandon said.

While Disney has not greatly expanded the number of kiosks (this year there are 30), Brandon says what has grown is the sophistication of the food that’s being served.

The most popular items, though, are also the simplest.

Pierogis in Poland, apple strudel in Germany and cheedar cheese soup in Canada are three of the most popular food items at Epcot Food and Wine Festival. They’ve never been off their menus. (Disney)

“There are some items, like the pierogis in Poland (debuted in 1996), that have never left the menu,” Brandon said. “I think when people are having their cocktails or wine, it’s like a comfort food.”

Two other popular items — the cheddar cheese soup at the Canada kiosk and the apple strudel in Germany — are items you could get any day at Epcot itself, let alone make at home.

“People are coming and this is their once a year trip to go to the festival,” Brandon said. “I think they have those dishes that are just endearing and memorable. A lot of food is memory. It’s a communal thing.”

Of all the festivals, Brandon’s favorite year is only the second one, 1997.

That was the year of the gala fundraiser that featured an incredible collection of chefs — including the one and only Julia Child.

“It was the most unbelievable collection of chefs: Daniel Boulud, Paul Bocuse, Roger Verge, Gaston Lenotre,” Brandon said. “Nobu [Matsuhisa] was there, Eric Ripert….” And many others.

“For me, that year was really, really, really special,” Brandon said. “And through the years we’ve had incredible celebrity chefs, but we’ve added to it the wine tastings, the chef demos, we’ve made it kind of this place not just for tasting wine but for learning.”

We asked Brandon for some insider tips to help you maximize your festival experience.

“I always tell the locals, go out on a Monday or Tuesday. Oh my God, go out at 11 a.m, you can walk all the way around World Showcase, get your exercise, sort of scope it out. I do this, I literally do this every year, I scope it out and then I know that, ‘I’m not going to get the cheddar cheese soup but I’m going back for that lobster scallopine in Ireland. So Monday, Tuesday at 11 a.m. are the very best times to get there. No crowds, it’s cool, you’re not in the heat of day, and then wander through and pick and choose.

“Everyone has their favorite. You can’t eat it all.”

Also, aim for mid-festival or near the end.

“Stop at the Festival Center and pick up the day’s schedule because there might be some fun little thing you can attend later in the day.”

The Festival Center is always located in Future World between Mission: SPACE and Universe of Energy.

EAT TO THE BEAT CONCERTS

“You don’t even have to be in the audience, you can stand in the back and listen.”

IF YOU CAN, DO PARTY FOR THE SENSES

Inside Party for the Senses, an annual event at Epcot Food and Wine Festival. (Disney)

It started in 1997, and they called it Grand Tastings, and it was a much smaller event. Now it will feature up to 50 food and beverage stations in the World Showplace tent, plus entertainment by Cirque du Soleil.

“I feel you do get your money’s worth in just small, wonderful bites and wonderful pairings.”

General admission for Party for the Senses is $169.

Also, don’t shy away from the suggested wine pairings.

“[The sommeliers at Disney] don’t take their jobs lightly, they really want to come up with a great pairing,” Brandon said.

GET KIDS TO TRY THINGS

“We’ve added more things for kids, so the kids can come in. It’s a wonderful way, if you have kids that might not be so adventurous, they can try something. You know, for five or six bucks you can buy whatever, escargot or whatever that might be, and somebody can have a bite of it. It’s that sense of adventure that people remember.”