Orlando Attractions Update – The Epcot International Food & Wine Festival can be overwhelming for those not prepared. To get you ready and to highlight some of the new items and experiences (as well as fan favorites) here is the Orlando Sentinel’s version of the festival from A to Z.

Alcohol: It’s not all about the food. From craft beers to wines to cocktails (including non-alcoholic options) there’s something for every taste. If you wish to take it a step further, check out special-ticketed beverage boot camps like “Exploring Wines the Mondavi Way” or “Demystifying Bourbon the Maker’s Mark Way.” 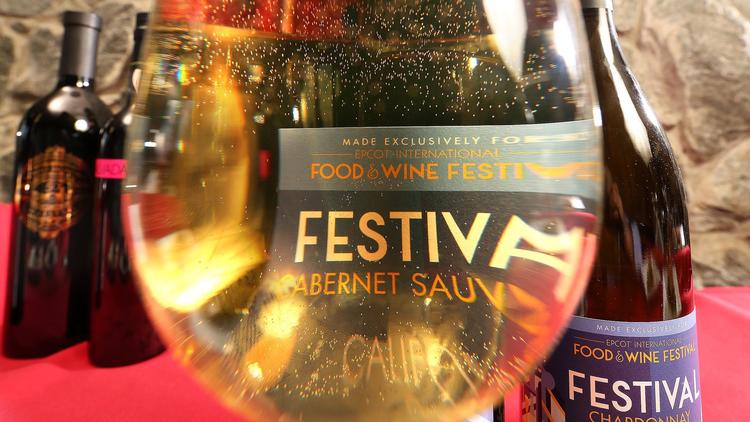 An exclusive sneak peek at featured dishes being showcased at the 21st edition of the Epcot International Food & Wine Festival. The festival kicks of Wednesday and runs through Nov. 14, 2016.

Beef brisket and pimento cheese on garlic toast: One of the new tastes at the festival. It can be found at the Hops & Barley marketplace.

Chew: As in “The Chew.” The popular ABC daytime show makes an encore at the festival with a week’s worth of episodes from Oct. 5-7 (Those show will air Oct. 10-14).

Demonstrations: There are seemingly countless cooking demonstrations to choose from during the festival. Each 45-minute demonstration features a renowned gourmet demonstrating how to make a delicious dish, from allergy-friendly meals to how to cook the perfect lobster. You can view the full list here

Eat to the Beat Dining Package: The dinner and a show package now features some breakfast options like The Garden Grill. The package includes gatanteed seating for the Eat to the Beat Concert Series.

Farm Fresh: The farm-to-fork marketplace returns with eats like chicken and dumplings and the popular loaded mac ‘n’ cheese.

Hands-on experiences: Several new hands-on experiences are coming this year, including a Mix It, Make It, Celebrate It! sushi how-to with celebrity Iron Chef Masaharu Morimoto and Culinary Adventures with a Master Chef at Disney’s Contemporary Resort.

Islands of the Caribbean: One of the new marketplaces this year. It will feature a fusion of food and culture from the islands. And drinks, too, including a frozen mojito and Caribbean sangria.Jamie Deen The celebrity chef and son of Paula Deen will be the special guest for the “What’s Cooking With..” event on Oct. 7. Others include Graham Elliot (Sept. 30), Cat Cora (Oct. 9) and Andrew Zimmern (Oct. 21), among others. These are special-ticketed events and run $129 per guest. Required Epcot admission is not included.Kurt Russell’s GoGi “Tiger” Pinot Noir: Yes, that Kurt Russell. He started Gogi wines in 2007 and his famous pinot will be part of the new Wine & Dine Studio at the festival.

Liquid Nitro Chocolate-Almond Truffle with Warm Whiskey Caramel: This delectable dish will be available at the new Chocolate Studio.

Mojo pork with black beans and rice: This new dish can be found at the Islands of the Caribbean kiosk in the World Showcase.

Pork tenderloin with cannellini bean ragout: One of the new dishes this year.

Quesito: The puff pastry with sweetened cream cheese and guava sauce is the sweet treat at the new Islands of the Caribbean marketplace.

Seared scallop: Found at the new Wine & Dine Studio, the scallops sit on a velvety scoop of truffled celery root puree and comes with Brussels sprouts and mushrooms.

Trader Sam’s Grog Grotto: The popular Polynesian Village Resort eatery will host a new lunchtime behind the scenes event, with a look at its history and specialty drinks. 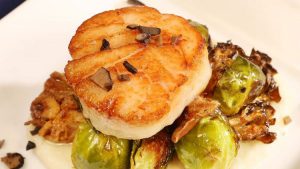 Underwater fun: Take a break from the food over at Future World at The Seas with Nemo and Friends. You can cool off and visit with manatees: Lou and Little Joe.

Vegan nachos: Officially called loaded Greek nachos, this is one of the new dishes at this year’s festival. Disney describes it as pita chips, “meatless sausage crumbles” and vegan tzatziki made from cashew cream. The “feta cheese” is really seasoned tofu.

Wang Chung: The popular 1980s new wave band kicks off this year’s Eat to the Beat concert series. They are one of eight new acts in the lineup.

Xingu Black Beer: This brew from Kaiser Brewery can be found at the Brazil marketplace.

Yelloween: The Party for the Senses takes on a Yelloween theme Oct. 28 and 29.

Zakarian: As in Iron Chef and restaurateur Geoffrey Zakarian, one of the six celebrity chefs who will make their festival debut. Other newcomers include Maneet Chauhan, Duff Goldman, Elliott Farmer, Masaharu Morimoto and Graham Elliot.

An exclusive sneak preview of some of the new dishes and events that will be featured at the Epcot International Food and Wine Festival.