Dragon Challenge rumors  persist online about the possible closure of Dragon Challenge somewhere down the road to make way for a new Wizarding World experience. The online whispers speculate that it will be based around the burgeoning “Fantastic Beasts” movie franchise that has recently been rolled out by Warmer Bros. Having enjoyed the first film immensely we could totally see why Universal might decide to go this new route.

What Will Replace the Dragon Challenge at Universal Orlando? 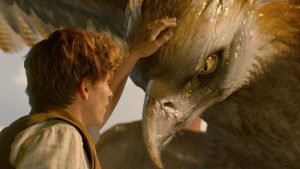 Online whispers report that Universal Orlando Resort could potentially base a new ride off magical creatures in the Wizarding World, and not any specific plot line from “Fantastic Beasts”.  Adapting the first installment “Fantastic Beasts and Where to Find Them” would be problematic as it takes place in New York in 1926 – and the existing ride is right there alongside the village of Hogshead. (Not known for being a borough of NYC!)

“Fantastic Beasts” serves as a prequel to the events of Harry Potter and according to the author it will consist of 5 films taking place over the course of 19 years, which would set the conclusion of the story in 1945. That might be difficult to fit into the constraints of the park as it exists currently. Universal Orlando’s rumored plan would include removing the coaster track, demolishing the line area, and completely rework the space, which is considerable given that Universal doesn’t have a whole lot of available land to work with.

The Orlando Business Journal reported on two Universal patents which may fit nicely into this rumored concept. The patents described “vehicle transportation room system and method” and “system and method for a moving puzzle theater.” The patents also show a walled off system that would hide the innards of the ride’s launch system from guests and allow for seamless methods for Universal Orlando to present story elements to guests while transitioning the ride vehicles. OBJ has speculated that this is for the “Floo Network” teleportation in the Wizarding World, and that would give Universal a lot more latitude with the location of the ride. Maybe the story won’t take place at Hogsmeade but instead transport guests from and back with the “Floo Network”- who knows?

We along with everyone else will have to see what the rumor mill throws or way in the coming months!