SeaWorld is replacing “Blue Horizons” a long-running show featuring dolphins doing tricks alongside acrobats with a new one aimed at educating audiences about the animals’ personalities. 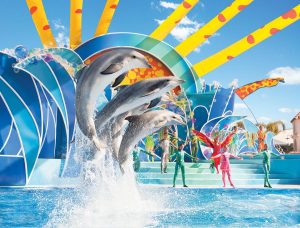 ”Dolphin Days” will include information about how to protect the animals in the wild, and it will have a segment in which a volunteer from the audience gets an encounter with a dolphin and a green-winged macaw.

The changes come as SeaWorld tries to remake its theme parks with an strong emphasis on conservation and ongoing animal rescues. Among the changes: The theme park’s orca shows in the future will concentrate on natural behaviors of the animals.

This conscious shift — from a bright, sensational style to one with a more environmentally friendly message — is not really surprising, said Scott Smith, assistant hospitality professor at the University of South Carolina.  “It kind of goes with the whole narrative that they’re trying to do right now,” Smith said.

When does Dolphin Days Debut?

“Dolphin Days” will debut on April 1 in the theme park’s Dolphin Theater, the company announced Thursday. Final performances of “Blue Horizons” will be March 31.

SeaWorld said that the new show is “still in development.” It will include macaws and other tropical birds, which were popular elements in “Blue Horizons.” SeaWorld’s park in San Diego also has a show named “Dolphin Days.” The Orlando production will be “inspired by” the California version but will not be a clone of it, SeaWorld says.

On the other side of the Orlando park, a remodeled dolphin nursery is under construction. It is expected to open this summer.

The park is also planning “Electric Ocean,” a nighttime spectacular, and a virtual-reality add-on to its popular Kraken roller coaster this year.

“Blue Horizons” had an 11-year run at SeaWorld Orlando. The show had included dolphins doing tricks alongside human performers, some of whom did acrobatics above the water and with the animals.

The park may be aiming for visitors in the middle of the spectrum between extreme animal activists on one end and, on the other end, the “Joe Regular Tourist,” who wants to see dolphins jump through hoops, Smith said.

It’s that “middle-of-the-road family that’s not environmental activists, but they’re environmentally conscious. They recycle, and they try to do the right thing, so to speak,” he said. “I suspect that’s who SeaWorld is aiming for.”