According to the park watchers at the Orlando Sentinel, lucky SeaWorld guests can now spy the baby dolphin born at the theme park last week. Visitors have actually been there since the beginning of the calf’s life as first-time mother Bree gave birth in the dolphin nursery attraction with several guests watching. Come by and see the dolphin calves at SeaWorld. 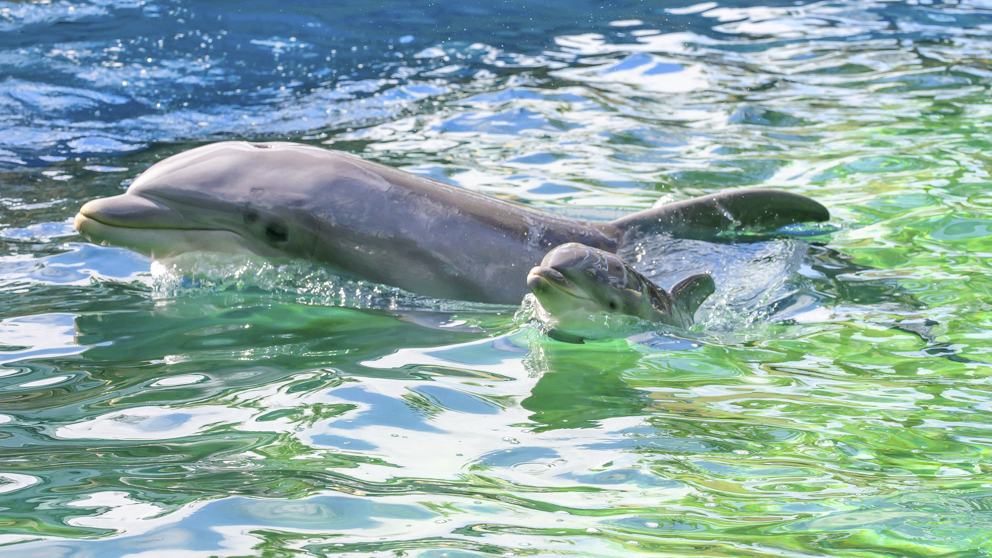 Bree birthed her offspring midafternoon on Sept. 29. There were no complications, according to Jon Peterson, vice president of zoological operations.“If you’ve never seen a dolphin birth, it could look like drama,” Peterson said. “You’ve got her swimming. She’s got flukes and tails hanging out, and she’ll make a hard turn and flip. That’s a very natural birthing move.”

SeaWorld’s education staff was on hand at the birthing to explain to visitors. “For an everyday guest that comes into our park … to see a birth and get to hear about it, watch the excitement and see it take its first breath? I think that’s one of the coolest things you can ever do,” Peterson said.

The newborn, who has yet been given a name yet, and her mother are under 24-hour surveillance for a few more weeks. Observers are monitoring for good nursing, weight gain, and eating habits, Peterson said, along with making sure the other dolphins are getting along with the addition.

“It’s really no different than if you brought a new baby home and you already have a couple of children,” he said.

There are seven dolphins in the nursery, which was remodeled a few years ago to give park guests better views of the dolphins. SeaWorld Orlando is home to 47 dolphins.

Technically, it’s SeaWorld’s second dolphin birth of the coronavirus pandemic era. The first occurred two days after the theme park closed to the public in March. That calf is named Spark.

“Spark would have been the first baby ever seen by our guests, but, unfortunately, COVID sort of threw a wrench in that,” Peterson said. Spark lives in the same pool with the newborn, who as a 1-week-old weighs 36 pounds and is about 4 feet long. Eventually, she’ll be about 500 pounds and about 7 feet long.“Her mom’s a big mom, so I’d expect her to be on the bigger side, genetically,” Peterson said. “Everything we’re seeing right now is right on the marks to the milestones we expect.”

Be sure to stop by and see dolphin calves at Seaworld.