Disney water parks may be following Universal’s lead and dipping their toes into a virtual-queue system . The resort began testing a reservation procedure for select attractions at its Blizzard Beach and Typhoon Lagoon water parks this week. 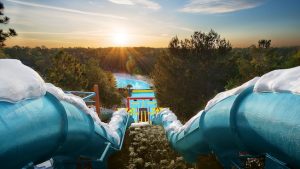 The experiment will likely last into early April, according to various Internet reports and Disney World cast members. On Tuesday, a skip-the-line option was offered to guests wanting to ride the Downhill Double Dipper slide of Blizzard Beach.The passes may also be coming to the popular Slush Gusher and Summit Plummet plus the new Miss Adventure Falls at Typhoon Lagoon.

The testing procedure resembled one of Disney’s old-school FastPass attractions. Visitors arrived at the base of the Double Dipper and were given the option of receiving a 15-minute time frame to return. The time was printed on a card with a rubber band attached for putting around guests’ wrists. The card warned that there would be a “moderate wait.”

The system was not connected to Disney MagicBands, and reservations could not be made digitally through the My Disney Experience app, which is a key cog for the FastPass+ reservation system used in Disney World theme parks. Tuesday’s testing was done with minimal signage. A simple sandwich board near the entrance of Blizzard Beach mentioned a special “Virtual Queue” and the location to receive a reservation

The idea is to decrease waiting time, thus giving visitors more time to explore other attractions, eat or shop – no surprise there then!