Orlando Attractions Update – Downtown Disney (or Disney Springs as it’s going to be known) is currently undergoing a lot of changes to transform itself into a new look family entertainment venue. WDW has now confirmed Disney Quest that another long time attraction at Downtown Disney’s West Side will be closing next year. 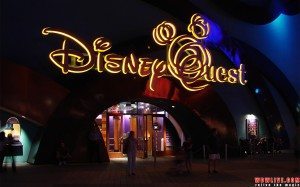 The 100,000-square-foot indoor virtual theme park is an arcade lovers dream and has entertained countless guests since opening in 1998. Though very popular during bad weather the indoor venue has become a little staid in recent years and rumors of its closing have been rife for quite a while.

Replacing Disney Quest’s place we will be a new sports themed attraction, The NBA Experience, that will include both an interactive venue and a restaurant. Given current trends and the presence of the NBA cafe at Universal CityWalk maybe a soccer theme would be a better choice?