Disney’s recent parent filings seem to indicate that the company is looking into how to further enhance technology used in virtual-reality experiences.

Potentially trying to improve the way someone using VR might move freely in an area and have that area compensate for the user’s movement to make sure they don’t hit any obstacles.

The patent application describes it as “Floor system providing omnidirectional movement of a person walking in a virtual reality environment,” and it describes how a floor with multiple vibrating activator pads could move or respond to users stepping on them that allow the guest to feel as if they are walking through a larger environment, while not moving at all or at least less than perceived. 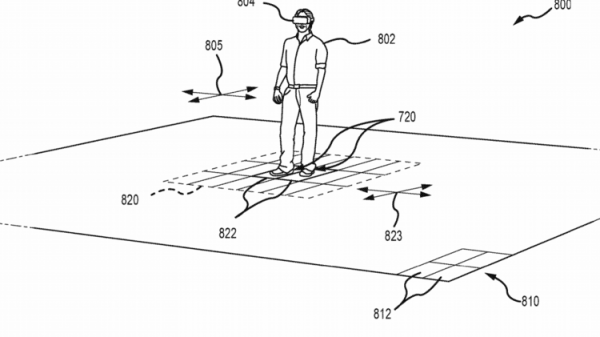 Disney’s patent doesn’t illustrate specifically how the technology might be used in a theme park setting – but it may be a clue as to which direction those famous Disney ‘Imagineers’ are heading in when it comes to future rides and attractions.

Here’s a more detailed description from the patent application:

The VR floor may be operated to allow the VR participants to walk under their own power for one to many steps. Then, when it is determined to be desired to modify this “natural” movement, a set of active tiles associated with the present location and predicted travel path of each VR participant is operated concurrently and in a manner for each participant to move in another direction. For example, the motion as shown with arrows may be opposite the current or predicted direction of travel so as to avoid a collision with a wall defining the space of the VR system, to avoid the other participant, or achieve another desired result. The motions imparted to the VR participants are independent and concurrent even though they differ in this example. The motions may slow the movement by the VR participants or may even be at a rate that halts the motion (e.g., the people effectively walk in place) or that even reverses the motion (e.g., the people are moving at a rate that is faster than their walking pace).

An artists rendering  shows how the paths could help lead users in the same room in opposite directions, while experiencing similar scenarios. The patent states that certain wearable shoes could be designed to further enhance the experience and sensations felt that can also help guide users.

The document also describes how the technology could allow users to see objects farther away in the simulation — like media on screens on the VR space walls or by VR headsets that can portray huge vistas — and have the sensation of walking significant distances in the VR environment, such as toward a distant object that may appear to be closer as the walking motion causes the space to be decreased, even while confined to the real-life room of the operation.