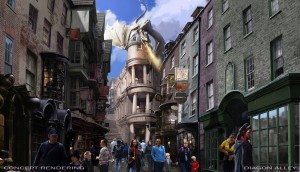 The scaly figure was soon surrounded by scaffolding and material that keeps curious muggles from getting a clear view. It can though easily be seen from a handful of vantage points if you stand on tippy toes!

There’s still no official opening date for the attraction from the Universal Orlando camp, so may as well take the time time to review what we suspect is going down: