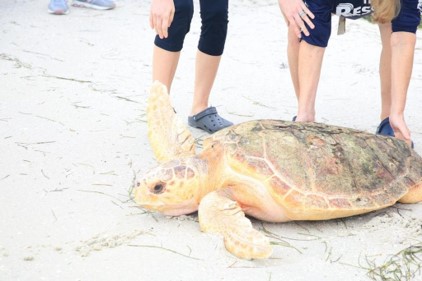 Clearwater Marine Aquarium released Wiley, a sub-adult loggerhead sea turtle on Wednesday, February 19, 2020, after nearly eight months of rehab care. Wiley was found floating near the Crystal River Duke Energy Power Plant in mid-June 2019. Upon intake, Wiley was underweight, had a large number of barnacles and algae on her carapace (shell), which indicates she may have been ill for some time. After further diagnostics, it was determined that Wiley had air in her body cavity causing her to float and was unable to submerge for long periods of time. With medications and several months of care, Wiley’s buoyancy improved. She began exhibiting natural sea turtle behaviors and was able to submerge underwater. After gaining around 30 pounds, Wiley was healthy again, resting on the bottom, and ready to go back home! She was cleared for release by both CMA’s veterinarian and Florida Fish and Wildlife Conservation Commission (FWC).

On February 19, Wiley was released off the beach at Fred Howard Park with help from CMA staff and volunteers. A crowd of beachgoers and supporters cheered as Wiley raced back into the Gulf. Please, wish her well out in the wild! 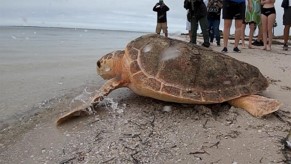 Another incredible release was that of Olivia, a large juvenile (almost sub-adult) green sea turtle on Wednesday, March 11, 2020, after ten months of rehab care. Olivia was found floating near John’s Pass in Pinellas County on June 2, 2019. Upon intake at CMA’s surgical suite, a physical exam found that Olivia had severe injuries to the carapace and left rear flipper that appeared to be consistent with an old boat strike injury. Due to the severity of her injuries, CMA’s  veterinarian determined that the amputation of the left rear flipper was necessary.

The damaged portion of Olivia’s carapace was also removed with a CO2 laser. Further diagnostics confirmed Olivia was battling an infection in her shoulder joints that was affecting the use of her front flippers and her ability to dive. After months of rehab, Olivia’s wounds have healed and the use of her front flippers has greatly improved! She is able to swim, dive, and forage regularly! She has been cleared for release by the veterinarian and by Florida Fish and Wildlife Conservation Commission.

On March 11, Olivia was released off the beach at Clearwater Beach with help from CMA staff and volunteers. A large crowd of spring break beachgoers and supporters cheered as Olivia made her way back into the Gulf. Clearwater Marine Aquarium is saving the turtles this spring, and every day.

Join the CMA Sea Turtle Conservation Team on April 4 (see website for updates) for a special day focused on sea turtle nesting and conservation at Pier 60 in Clearwater Beach! Learn what you can do to help protect these endangered marine animals and participate in coastal cleanup activities on the beach. Traveler Tip: Registered beach cleanup participants receive a free t-shirt and goodie bag while supplies last. Please see CMA’s website seewinter.com for updates and details!