Christmas & New Year at Universal Orlando offers plenty to see and do in terms of entertainment, activities, and seasonal decor. Experience a fabulous Universal Orlando Christmas in the Wizarding World of Harry Potter, get down with the  the Grinch during his celebration in Whoville, and enjoy the world famous Universal Holiday parade. 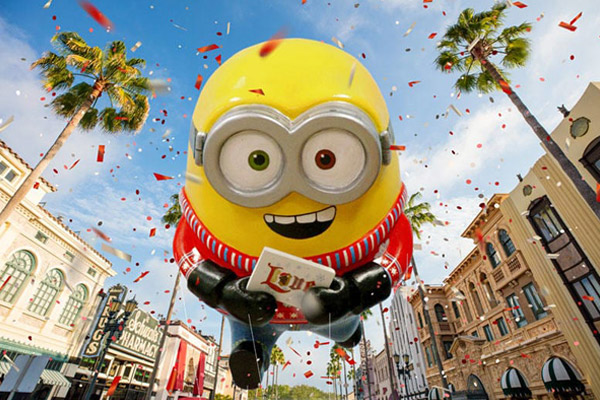 Universal Orlando’s Christmas festivities center around t2 main themes –  the Wizarding World of Harry Potter and Grinchmas. There’s lots of seasonal decor throughout the park and seasonal food is also in abundance.

Christmas in The Wizarding World of Harry Potter

Christmas in The Wizarding World of Harry Potter is something else! This magical themed area is completely decked out and should definitely be top of your Christmas list!

The Magic of Christmas at Hogwarts Castle in Hogsmeade 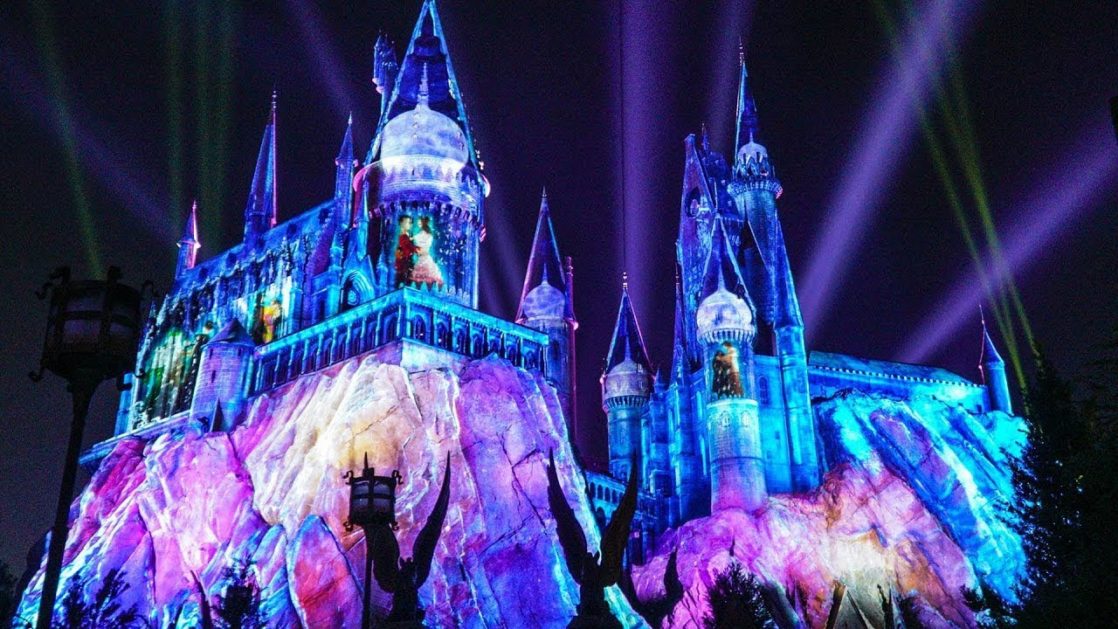 The Magic of Christmas at Hogwarts Castle includes lights, music, and projections on the castle of Hogwarts which makes for a stunning display.

Check the entertainment schedule on the Universal Orlando app for daily times. The Magic of Christmas at Hogwarts Castle show will begin in the evening and run every 30 minutes until park close. But on nights that the park closes early, there may only be one show. Be sure tofind out the time in advance so you don’t miss out! 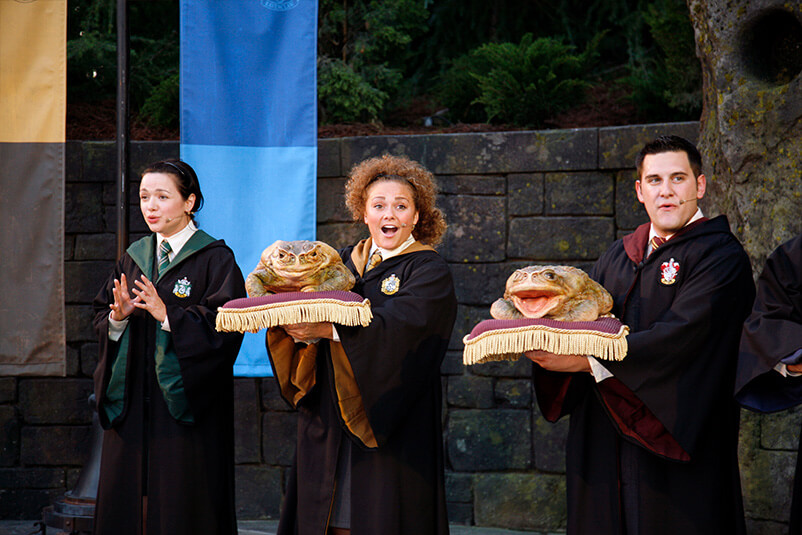 Croak along to some holiday songs from the choir of Hogwarts students and their talented frogs at Hogsmeade in Universal’s lslands of Adventure!

Tuck Into Some Scrumptious Seasonal Food 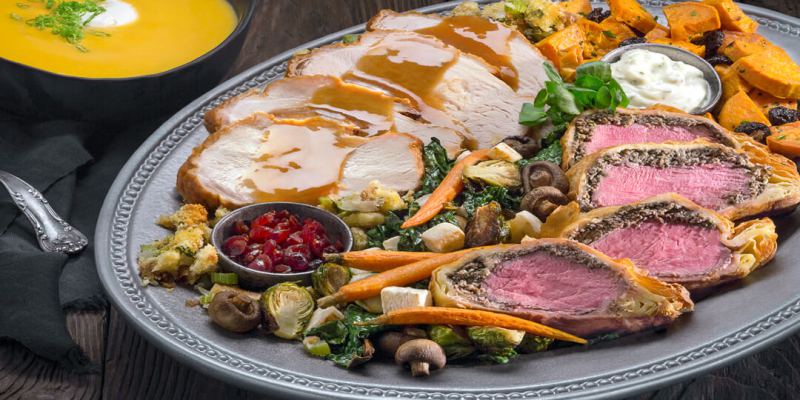 In the Harry Potter books, Harry and his friends enjoy a grand holiday feast at Hogwarts with all the fixings,

“Harry had never in all his life had such a Christmas dinner. A hundred fat, roast turkeys; mountains of roast and boiled potatoes; platters of chipolatas; tureens of buttered peas, silver boats of thick, rich gravy and cranberry sauce — and stacks of wizard crackers every few feet along the table…“

The Three Broomsticks in Hogsmeade at Universal’s Islands of Adventure offers a full holiday feast as a nod towards the Christmas dinner feast held at Hogwarts in the Harry Potter series. The Holiday Feast includes a few courses such as butternut squash soup, beef wellington, oven roast turkey, sweet potato, dried cherries, and winter vegetables.

The Grinchmas Who-liday Spectacular at Universal’s Islands of Adventure 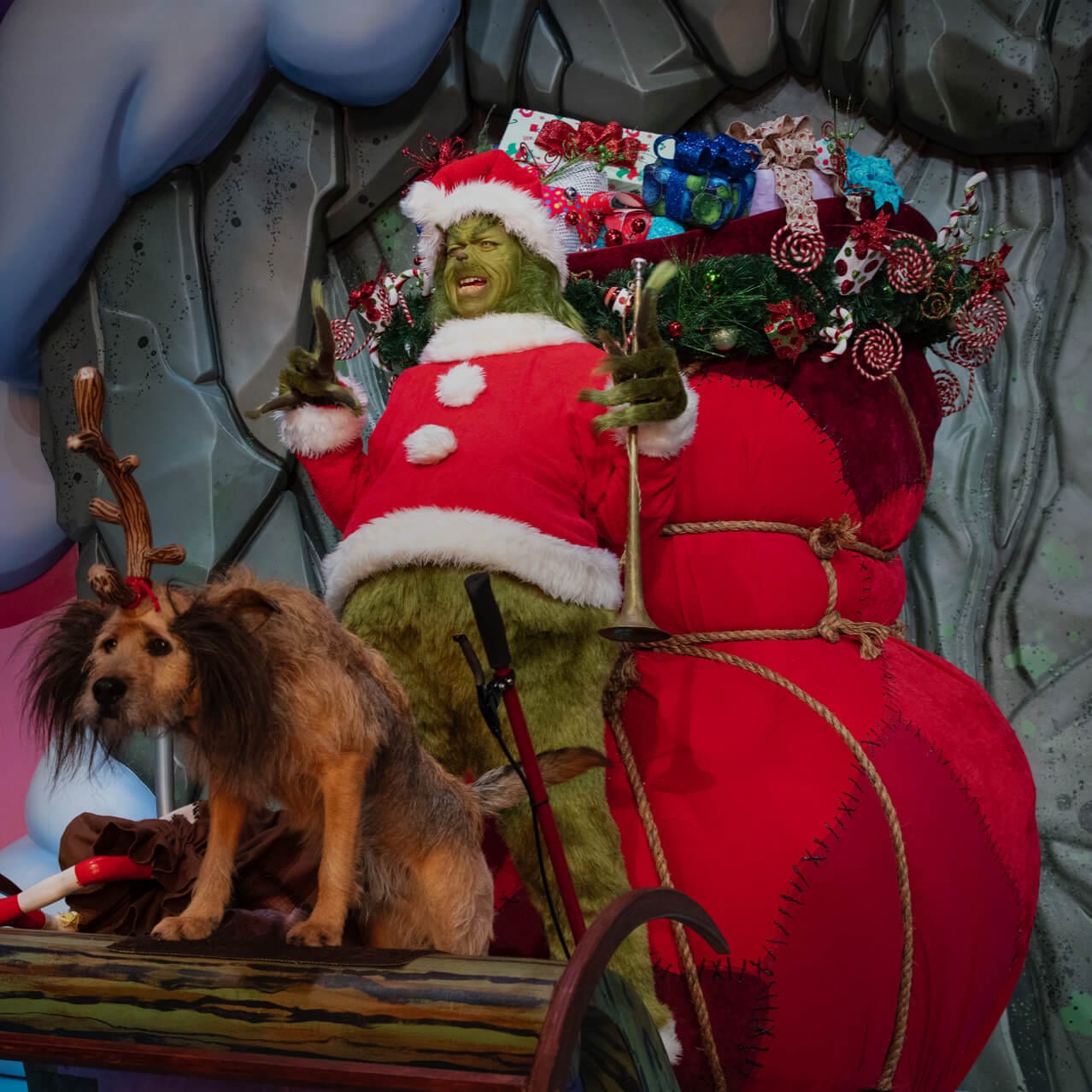 Universal’s Islands of Adventure also holds a celebration of Dr. Seuss’s How the Grinch Stole Christmas in Seuss Landing featuring all your favorite characters from the movie ready to share their Wholiday with your family!

Meet the Grinch Over In Seuss Landing 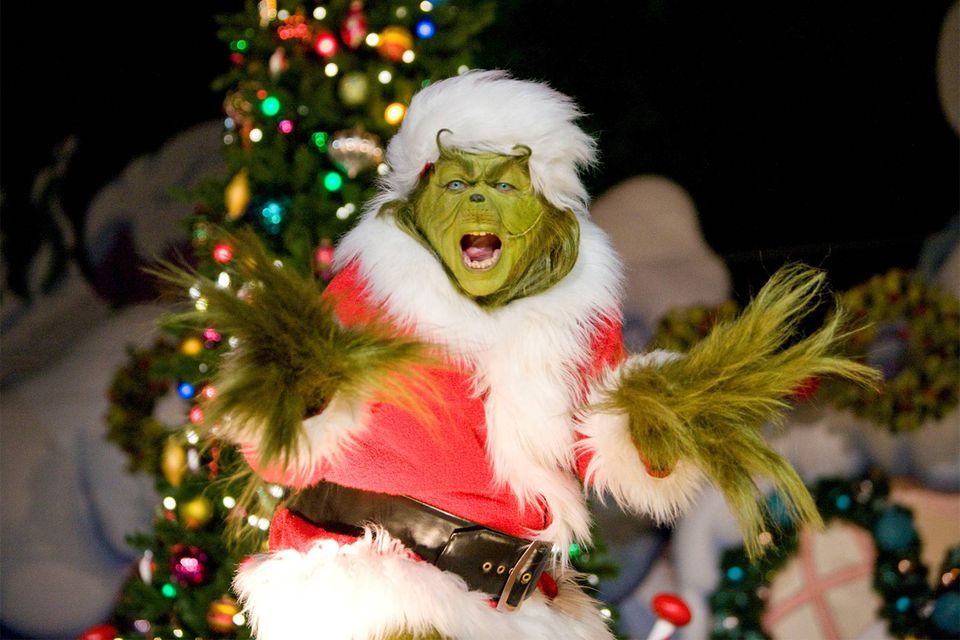 Meet Grinch and Max in Seuss Landing and snap a picture with this dynamic duo.

Check the entertainment schedule on the Universal Orlando app . 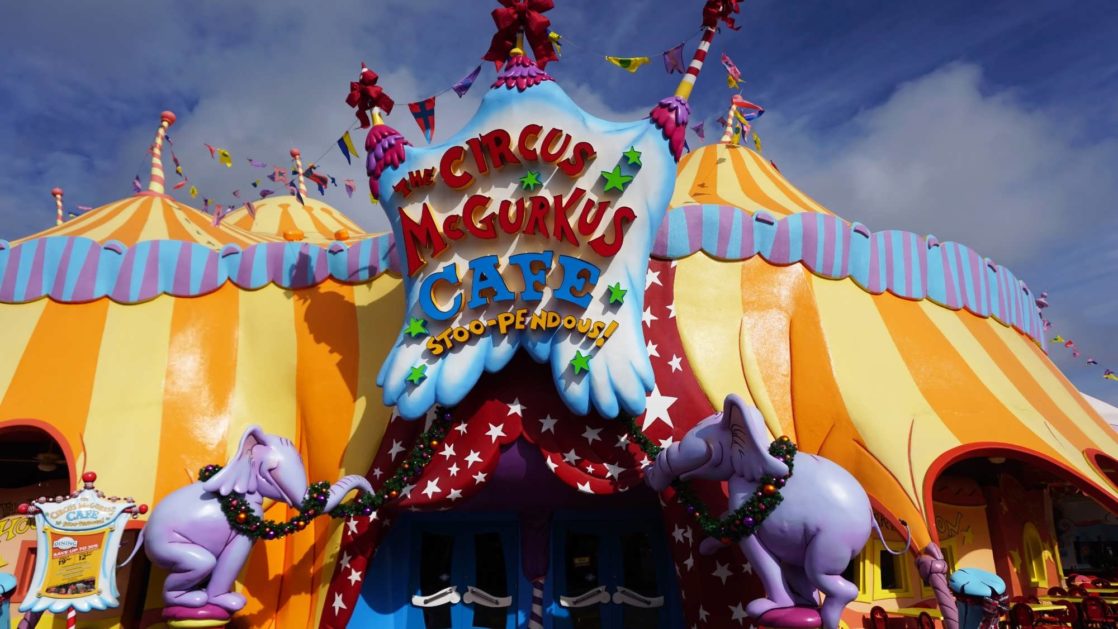 Grinchmas Who-liday Spectacular at Islands of Adventure is the main show for entertainment during Grinchmas. The show stars the Grinch in the telling of How the Grinch Stole Christmas. The show also features the spirited cast of Who-ville citizens and music recorded by Mannheim Steamroller. Make sure to get there early so you can get good seats- seats are first come, first serve. And no, you can’t use your Express Pass here to get seats!

Check the entertainment schedule on the Universal Orlando app for daily times.

The Grinch and Friends Character Breakfast

You can also enjoy a mischievous breakfast with the Grinch himself during your Universal Orlando Christmas experience! As you eat, the Grinch will come around stealing bacon (sassy Grinch) and posing for photos as you dine a full buffet including green eggs and ham!

This breakfast requires advance reservations and tends to sell out quickly. Make your reservation here. 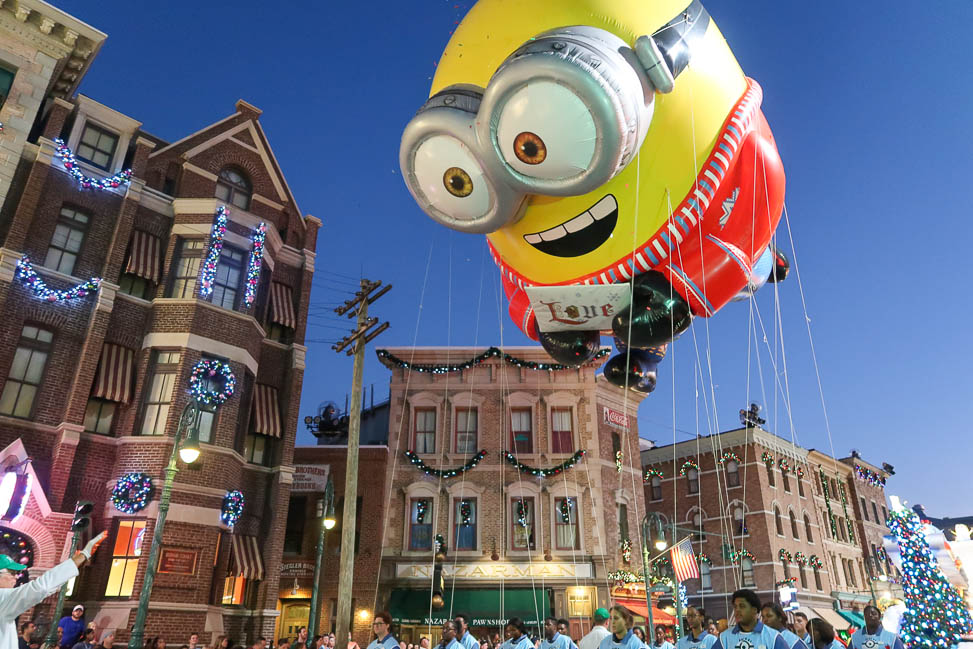 Universal’s Holiday Parade featuring Macy’s is a must see for your Universal Orlando Christmas. The parade features favorites such as the Minions, Santa Clause, characters from Madagascar and Shrek.

Check the entertainment schedule on the Universal Orlando app. 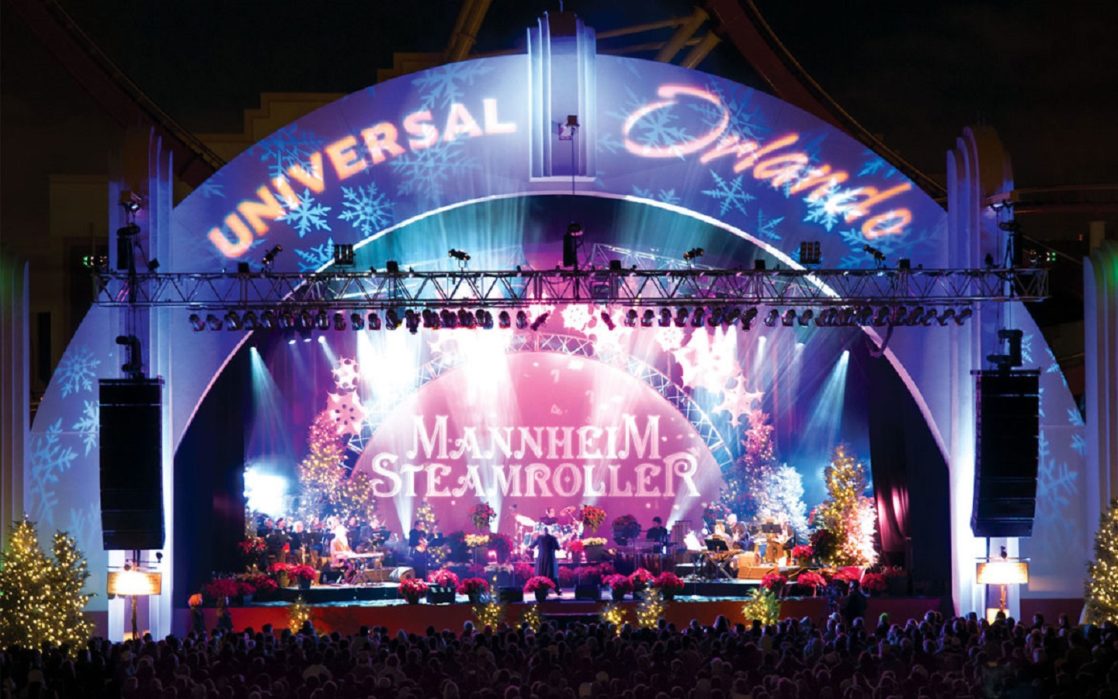 Check the entertainment schedule on the Universal Orlando app for daily times or ask the nearest park employee. 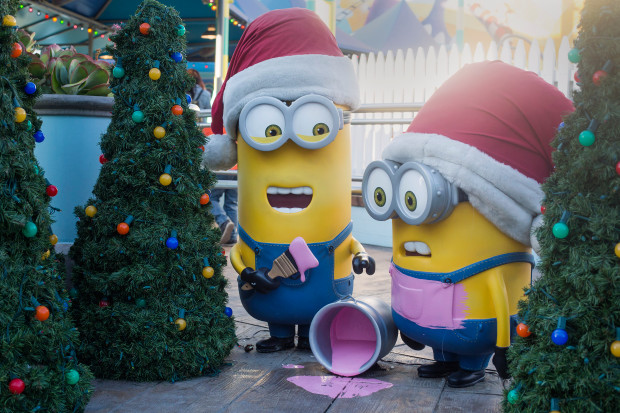 As this time of year tends to be crowded, here are  some additional tips for this holiday season as you enjoy your Universal Orlando Christmas: