Orlando Attractions Update-  – Spring has sprung, and Busch Gardens® Tampa Bay is excited to announce the two newest additions to the park – two baby sloths, weighing only six to 19 ounces each. The newest Hoffman’s two-toed sloth was born on March 24, and a Linne’s two-toed sloth was born on April 2. As a leading zoological facility, Busch Gardens will share information about these newest babies with the scientific community, as not much is documented about the gestation of these species. Guests can see both baby sloths in the coming weeks in the park and at Jambo Junction, Busch Gardens’ home to animal ambassadors who represent their counterparts in the wild. 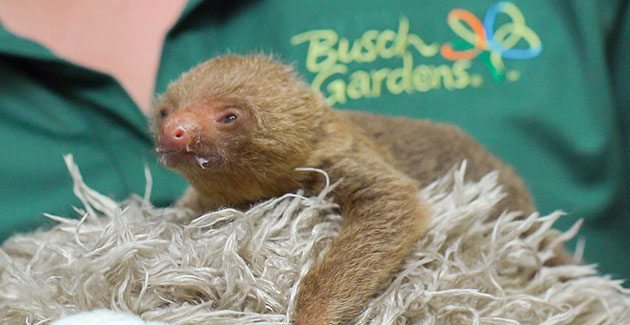 Hoffman’s Two-Toed Sloth
Born to mother, Grizzly, and father, Teddy, the four-week-old baby Hoffman’s sloth weighed in at 186 grams (6.6 ounces) at birth. After noticing that the baby was not nursing regularly, the animal care team made the decision to hand-nurse the baby via syringe every two hours. The baby is currently healthy and under 24-hour watch.

Linne’s Two-Toed Sloth
Weighing 550 grams (19.4 ounces) at birth, the three-week-old baby Linne’s sloth was born to first-time mother, Daisy, and father, Mario. The baby is currently healthy and being cared for by its mother with the animal care team monitoring closely. 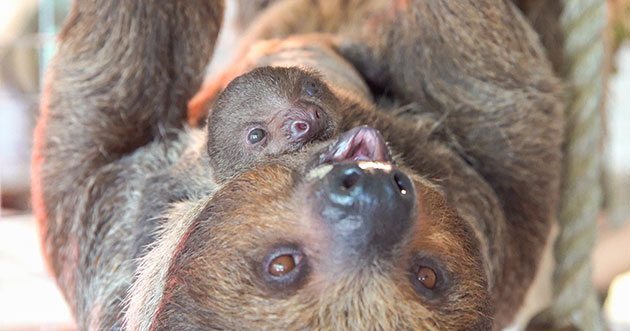 Sloth births are part of Busch Gardens’ partnership with the Association of Zoos and Aquariums’ (AZA) Species Survival Plan® (SSP). The mission of the SSP is to cooperatively manage species populations within AZA-accredited facilities.

Since 2006, the SeaWorld and Busch Gardens Conservation Fund has supported organizations like the Pan-American Conservation Association (APPC) in the form of grants and on-site support. The APPC is Panama’s leader in wildlife rescue, helping to rehabilitate and release wild sloths, jaguars, armadillos, tamanduas, tapirs and porcupines. Just last year, representatives from Busch Gardens Tampa Bay and SeaWorld San Antonio assisted with the design, construction and opening of the APPC’s new rescue center in Panama.